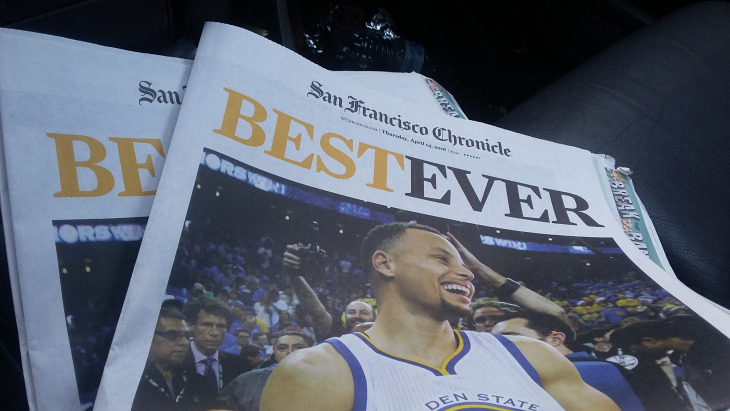 Well, how about that game last night? After the slugfest with the Spurs last weekend, I’m certainly glad for the easy street win to 73. Thank you for the anti-climactic, history-making game, and the kind reprieve to my stomach because I wasn’t prepared with the adequate supplies of Tums. I did get worried when Steph took one too many tumbles, but the game was as good as it gets. Oh, yeah, 402 three’s….that was a nice touch.

Then, I was a little miffed when my “authentic fans” switched from the Warriors game to Kobe’s Swan Song and oooo’ed and aaahhh’ed over the delighted boyish faces of Hov, Snoop, Kanye, George and Jack as Kobe hit those last five baskets and propelled the Lakers over the Jazz. One kid felt like it was a “We are the World” world peace kinda moment. Awwww, isn’t that nice, can we go back to the Warriors’ game please? But, Mom, it’s Kobe! Unless there’s Nutella involved, gimme the remote.

Back to the Bay, and this Golden Season of the Warriors. As I have said before, I was fortunate to witness history when the Niners dominated the gridiron back in the ‘80’s. Their 1984 season wins of 15-1 broke the Miami Dolphins’ record of 14 regular season wins, even though the Dolphin undefeated season record still stands. Watching the Niners back then, I knew I was watching history being made. I was watching a new phenomenon of the game, an excellence that hadn’t been seen before, “a thing of beauty” on the football field.

Even though I am a basketball bandwagoneer, I admit it, and I confess I don’t like basketball as much I like football, but I can’t help but express profound admiration for a team whose playing surpasses the best that had ever been played. Excellence, beauty, art, wherever they are manifested, should be highlighted and appreciated. I appreciate this Warriors squad not just because they’re winning, but they’re winning with grace and style, with beauty and artistry. This team has excited many who confess not to be “authentic fans”, many who quit watching basketball for whatever reasons, many who never watched the sport to begin with because of their recipe of incredible ball handling, team interaction, joy in playing and, of course, a little dash of Curry.

Excellence is as good as gold, and the Golden State Warriors certainly delivered a golden season to the Bay – to the world – this year. Now, excuse me while I run to Costco to bulk-buy some Tums and Pepto-Bismol because these playoffs are gonna be killers.:) 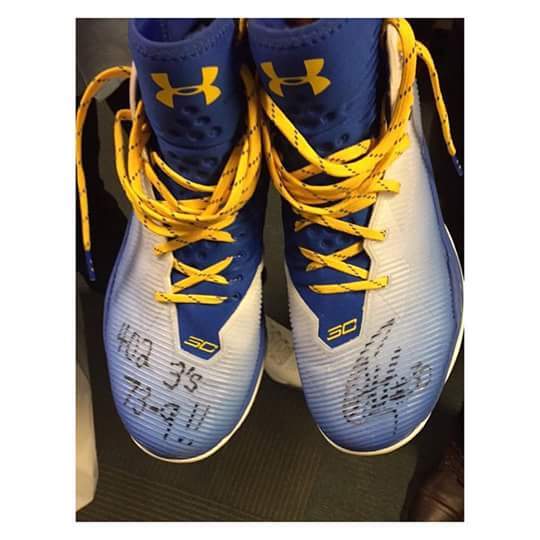 About Donna Fentanes
I am a mom of 10 kids living in Northern California. The name of my blog, “From the Shoe”, is swiped from Cheaper By The Dozen’s Lillian Gilbreth’s summer newsletter. The “shoe” reference is to the children’s nursery rhyme. I mix humor and philosophical musings with everyday events. I hope you like it. From the Shoe artwork by Alec Maloney.

Donna is also an avid writer who has joined the South San Francisco Library NaNoWriMo challenge and we greatly appreciate her additions to Everything South City.