South San Francisco Police investigators are continuing their investigation into the shooting that took place at Orange Memorial Park yesterday, April 25, 2016 at approximately 2:45 pm. The on-going investigation has revealed the shooting appears to be a targeted and isolated incident involving a domestic dispute. The suspect, 19 year old Cristian  Omar Cruz, and  the two victims knew each other and the  altercation  began  on the 600 block  of Railroad  Avenue. The altercation  continued  as the suspect and victims  walked  together  towards  Orange Memorial  Park, at which  time  it escalated  into the shooting, resulting in the death of the 19 year old victim.

There is no information at this time indicating the shooting was gang related. The extensive search for the armed suspect is continuing with the assistance of several local, state, and federal agencies. Anybody with information related to this investigation is encouraged to call investigators at the South San Francisco Police Department at 650-877-8900 or the anonymous TIP line at 650-952-2244. 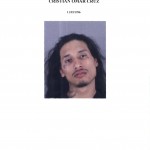 ← SSFPD Media Release: Homicide Shooting- Suspect at Large
Local Biotech Firms Hailed as One of the Best Places to Work →