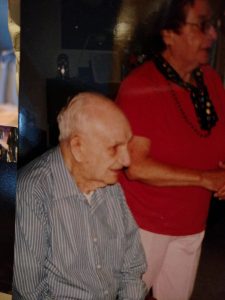 Raymond Bagley was born June 6, 1916 in Minnesota.  He was raised on a farm with his parents, 4 brothers and 1 sister. Not much of a fan of the harsh winters, after high school, Ray set his sights for CA. Then eventually his 4 brothers joined him where they all resided in Orange County, CA. Ray had various odd jobs in Southern California.  It was customary in those times to wait on the street corner and employers would seek out men for hire. Once, such an employer asked if anyone had experiences with horses.  Ray being a farm boy said, yes.  This led to a job on a dude ranch out in the valley where he taught regular folk and some move stars to ride. One particular movie star was terrified of horses.  With Ray’s help he eventually became a pretty good horseman. His name was Jimmy Cagney.

After the dude ranch, work was sparse, and Ray joined the Navy. He learned the plumbing trade which serve him well even after retirement. His service with the Navy ended and brought him to San Francisco.  Ray heard there was work building the Brentwood subdivision near San Francisco. Benny Segal had bought a plot of land in South San Francisco just to employ and home military families after WWII. They could work on the subdivision in their trade and choose the house that they wanted. They also got them cheaper than those that did not work on the houses. Ray was pretty proud that his neighbor paid 11K for his Brentwood home and he only paid 10k. He still retained the original deed signed by Benny “Buggys” Segal himself. This is where Ray chose to raise his family and still lives there today. Ray also did plumbing in the Westlake subdivision as the homes were being built. His plumbing skills gave him employment at the New Mission Plumbing and Heating on Hillside and then to Atlas Heating and Ventilation.

He was also a member of the Plumber’s Union Local 104 and 38. One of the perks as a union member was to be able to vacation with his family in Clear Lake and stay at Konocti Lodge.  Ray often enjoyed boating on Clear Lake and took his son with him, however, Bill did not.  Since his wife’s passing in 1994 Rays spends most of his time catching the sun from his favorite chair in the front corner of his living room next to a large picture window. Sometimes, you can catch him watching the Giants or Niner’s game or maybe the news. Saturdays his son Bill cooks a family dinner. His grandson Robbie and his girlfriend Cathy, and sometimes his favorite neighbor Pam and her cat Raven enjoys his company and Ray’s favorite spaghetti dinner.  Ray credits his longevity to his mom who also had a wonderful long life. He is the epitome of his generation. Straight talking, hardworking and honesty are the foundation of his character. I’m proud to call him my neighbor.

If you would like to help Ray’s birthday celebration please send a card or note to him!