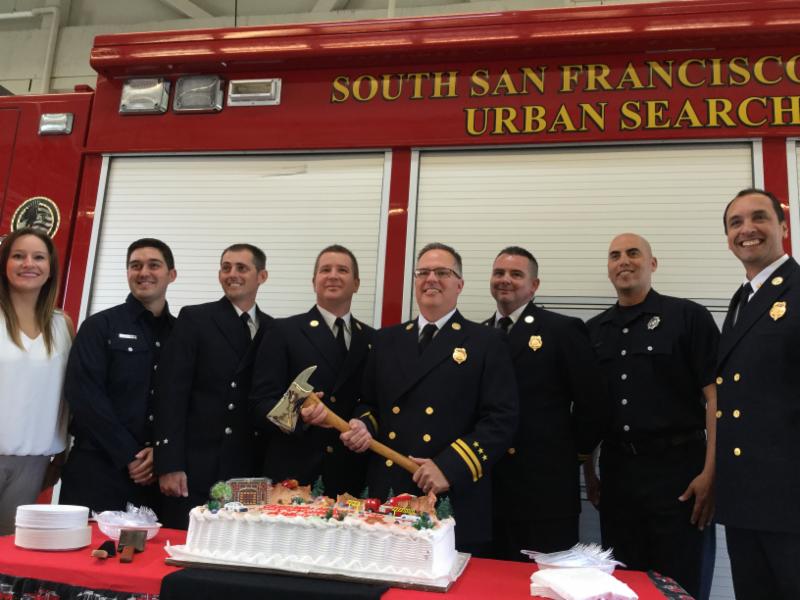 “It’s been nearly three years since we’ve recognized promotions, so today was well overdue,” said Fire Chief Gerry Kohlmann. “In addition, this is the first time in three years that a full, permanently appointed South San Francisco Fire Department management staff has been in place.”

The badge ceremony is timely given the approaching, “Fire Prevention Month,” which is annually recognized by the City in October. Nationally, Fire Prevention Week is celebrated October 9-15 and this year’s campaign, “Don’t Wait – Check the Date! Replace Smoke Alarms Every 10 Years,” represents the final year of a three-year effort to educate the public about basic but essential elements of smoke alarm safety.

“It’s important to raise the awareness not only about fire prevention, but also the need to pay attention to a small but crucial appliance in the home: the smoke detector. Three out of five home fire deaths in 2009-2013 were caused by fires in homes with no smoke alarms or no working smoke alarms,” says Fire Marshal, Luis Da Silva.

Fast facts about fire (www.nfpa.org)
Half of home fire deaths result from fires reported between 11 p.m. and 7 a.m. when most people are asleep. Only one in five home fires were reported during these hours.
One quarter of home fire deaths were caused by fires that started in the bedroom. Another quarter resulted from fires in the living room, family room or den.
Three out of five home fire deaths happen from fires in homes with no smoke alarms or no working smoke alarms.
In 2014, U.S. fire departments responded to an estimated 367,500 home structure fires. These fires caused 2,745 deaths, 11,825 civilian injuries, and $6.8 billion in direct damage.
On average, seven people die in U.S. home fires per day.
Cooking equipment is the leading cause of home fire injuries, followed by heating equipment.
Smoking materials are the leading cause of home fire deaths.
Most fatal fires kill one or two people. In 2014, 15 home fires killed five or more people resulting in a total of 88 deaths.
During 2009-2013, roughly one of every 335 households had a reported home fire per year.

Smoke Alarms
Three out of five home fire deaths in 2009-2013 were caused by fires in homes with no smoke alarms or no working smoke alarms.
Working smoke alarms cut the risk of dying in reported home fires in half.
In fires considered large enough to activate the smoke alarm, hardwired alarms operated 94% of the time, while battery powered alarms operated 80% of the time.
When smoke alarms fail to operate, it is usually because batteries are missing, disconnected, or dead.
An ionization smoke alarm is generally more responsive to flaming fires and a photoelectric smoke alarm is generally more responsive to smoldering fires. For the best protection, or where extra time is needed to awaken or assist others, both types of alarms, or combination ionization and photoelectric alarms are recommended.