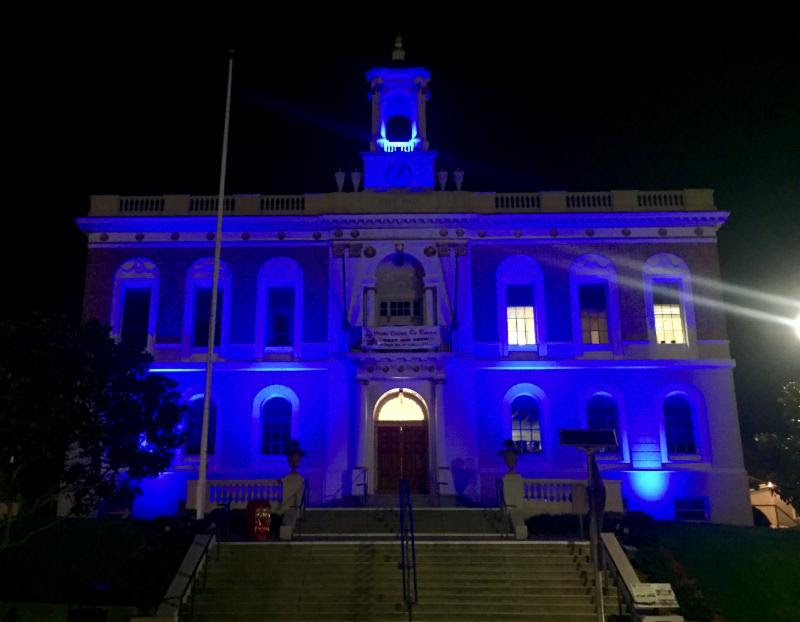 ‘South San Francisco, The City of Inspiration‘ – Chaplain Di Angelo
The City will keep our City Hall lit in blue for 7 nights representing the 7 points on a Police badge each point carrying a different meaning:divinity, fortitude, glory, honor, praising god, prudence, and virtue.

The City of South San Francisco is showing support for police around the nation, and specifically for its own police department, by lighting up City Hall the color of a police’s distinctive blue uniform this week. The nation has seen a growing number of incidents and violence against our men and women in blue, and sadly, South San Francisco has not been immune to this violence.

“Our community has always been a tight-knit community that supports our police officers, so when something bad happens to one of them, we all hurt,” says South San Francisco Mayor Mark Addiego. “Our police officers, and officers all over the nation, do their job unconditionally, day after day. By lighting up City Hall, it’s our way of showing our support for them.”

For the next seven days, City Hall will be lit up representing the seven points on a police star. Each point has its own meaning: divinity, fortitude, glory, honor, praising god, prudence, and virtue. The seven-point star is worn over the left breast ostensibly implying that the star is meant to protect the most vulnerable part of the human body: the heart.

The City of South San Francisco and its residents have grown even closer this past week as everyone remains cautiously optimistic about the recovery of one of its police officers, Robby Chon. Last Thursday, November 24, the 12-year veteran of the police force was seriously injured when he was allegedly attacked with a skateboard by a suspect he was chasing in South San Francisco.

Officer Chon remains in critical condition. However, he is awake and is surrounded by friends and family. “Officer Chon and his family are in our thoughts, hearts and prayers for a quick recovery,” added Addiego.