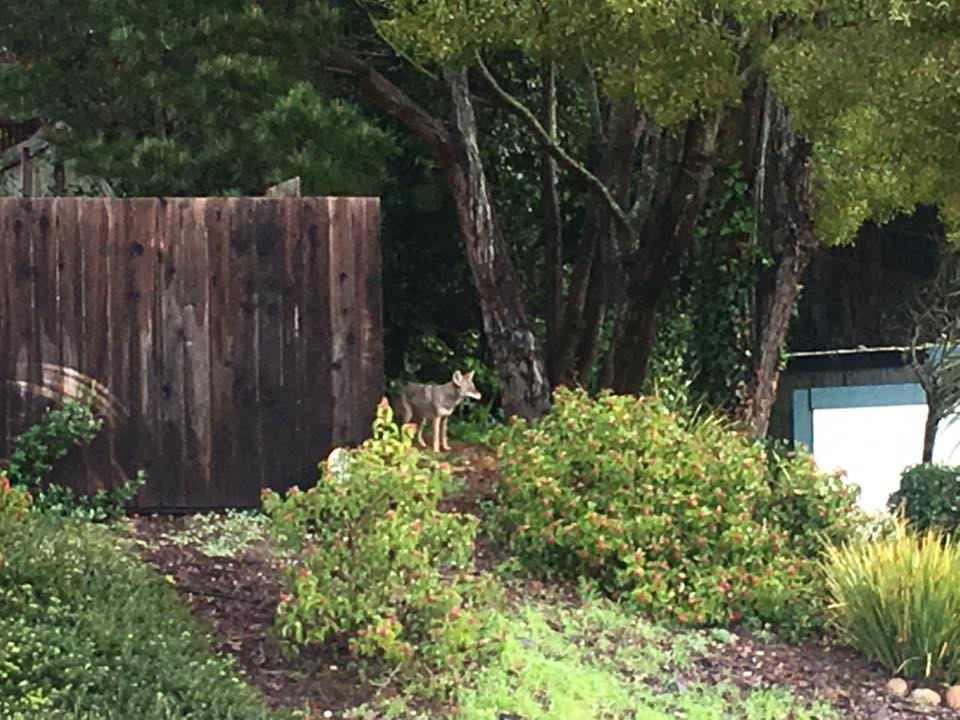 Several coyotes have been reported to be seen around the 2800 block of Fleetwood Drive
Photo: Cathy Anne Oliva

Reports of coyote sightings around town seem to have increased this past month or so, or at least there are more reports of them. Today Cathy Anne Oliva posted this warming to our Facebook page

I saw a fair sized coyote coming into Parkway Estates off Chestnut this morning at 6;45. Followed him on several security cameras as he wandered both cul-de-sacs then left and went up Chestnut to San Bruno Mountain.

We agree and thank Cathy and Robert for taking the time to share this warning. A while back someone shared a photo of a coyote walking down the street with a cat in it’s mouth, the coyote not realizing – or caring- it was someone’s pet – only knowing it was hungry and it had found prey. To that end it is extremely important that our neighbors do not feed these wild creatures on purpose as some have been known to do, or by accident when leaving pet food out in their yards.

We do know our region has a large coyote population and we can live in harmony if we all are mindful that these wild creatures must remain wild for their protection and for our own. While open space in our area is dwindling leaving less space for our wild critters, they do traverse the land around San Bruno Mountain, Sign Hill, the local cemeteries as well as the golf course. They have become more emboldened and not as fearful of humans as they once were and have been seen walking down the middle of the street in broad daylight.

We’ve also received warnings of foxes in our city, the ones in Golden Gate National Cemetery bordering Brentwood and Avalon neighborhoods have been known for a long time. On January 4, 2017 Boyd Ferry posted photos and a video on a fox he tracked in Briarwood Park which continues to prove we have some incredible wildlife still around us. “Here is 1 of the 3 briarwood park foxes. The red one, not in this video, is very pretty. He tried jumping a retaining wall 5 feet in front of me and failed jumped right back up and scaled it real quick.” Boyd said. 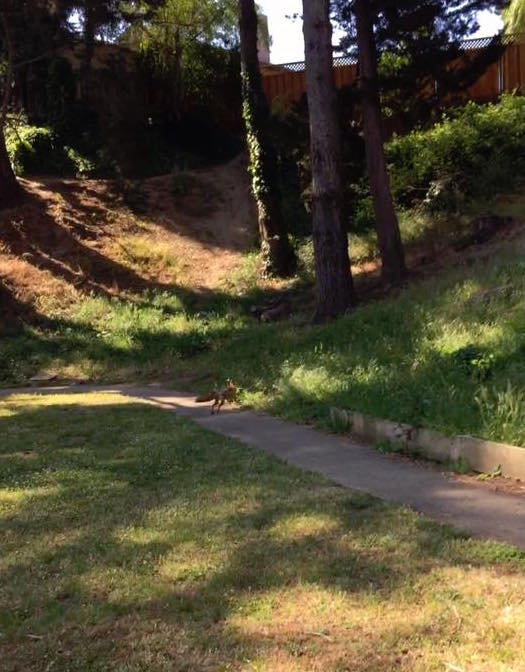 While not as abundant as our local coyotes, foxes can still be found roaming in our city as shown here in Briarwood Park on Jan 4, 2017.
Photo: Boyd Ferry

In July 2011 the City of South San Francisco Library and Park/Recreation Departments hosted the viewing of ‘Still Wild At Heart‘, a documentary film by Melissa Peabody depicts how coyotes and other wild animals impact city ecosystems and how animals and humans are learning to co-exist in an urban environment. (this film can be purchased more info CLICK HERE) Last year the City of South San Francisco also had warnings posted in and around several parks regarding coyote sightings and what to do when they are seen.

To see photos and to read more about our local coyotes and our neighbors interactions please CLICK HERE. Please send us your experiences and photos to news@EverythingSouthCity.com so we can keep our neighbors updated on local sightings.

In 2013 coyotes in Santa Clara County became such a nuisance killing chickens, they were tracked and killed because they cannot be relocated. Santa Clara County Vector Control District Manager Russ Parman worked to trap these creatures knowing the state fish and game laws do not permit the relocation of the animals, once the coyotes are captured, they will be euthanized. Rather than taking their lives us humans can do better by not allowing them to become problematic by following some rules as noted below from our Ca Dept of Fish & Wildlife on keeping our wild life – wild:

Wild animals are in trouble, and the problem is people who are careless with food and garbage.

Coyotes play an important role in the ecosystem, helping to keep rodent populations under control. They are by nature fearful of humans.

If coyotes are given access to human food and garbage, their behavior changes. They lose caution and fear. They may cause property damage. They might threaten human safety. They might be killed.

Relocating a problem coyote is not an option because it only moves the problem to someone else’s neighborhood.

“Coyote country” precautions
Never feed or attempt to tame coyotes. The result may be deadly conflicts with pets or livestock, or serious injuries to small children.
Do not leave small children or pets outside unattended.
Install motion-sensitive lighting around the house.
Trim ground-level shrubbery to reduce hiding places.
Be aware that coyotes are more active in the spring, when feeding and protecting their young.
If followed by a coyote, make loud noises. If this fails, throw rocks in the animal’s direction.
If a coyote attacks a person, immediately contact the nearest Department of Fish and Game or law enforcement office.
Stash Your Food and Trash
Allowing coyotes access to human food and garbage is reckless and deadly.

Coyotes primarily hunt rodents and rabbits for food, but will take advantage of whatever is available, including garbage, pet food, and domestic animals.

Put garbage in tightly closed containers that cannot be tipped over.
Remove sources of water, especially in dry climates.
Bring pets in at night, and do not leave pet food outside.
Put away bird feeders at night to avoid attracting rodents and other coyote prey.
Provide secure enclosures for rabbits, poultry, etc.
Pick up fallen fruit and cover compost piles.
Ask your neighbors to follow these tips.
Please respect and protect wild animals.
Keep them wild.