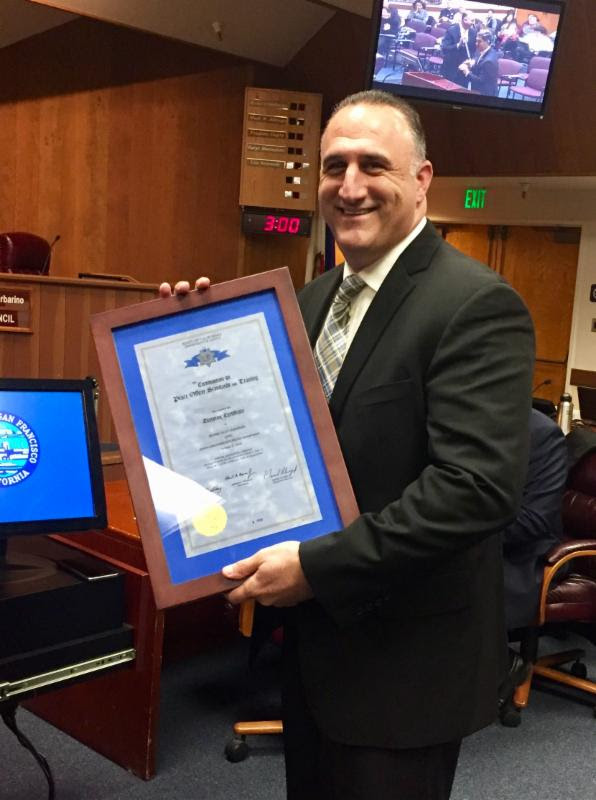 “Chief Azzopardi is dedicated to our community and to continually improving his leadership and executive skills,” said South San Francisco City Manager Mike Futrell, “and this high award from the Commission on POST objectively confirms what we already knew – that Chief Azzopardi is an outstanding Police Chief.”

The award was presented by the Executive Director of the California Commission on POST, Manny Alvarez, who noted that this award recognizes Chief Azzopardi’s dedication to his profession and places him at the “top of the top” of the law enforcement community in California.

South San Francisco Mayor, Pradeep Gupta, says he’s impressed with the Chief’s initiative and taking on additional training beyond what is required to improve his leadership skills. “It is a difficult time for law enforcement personnel right now, and now more than ever it is important to recognize our Chief and his staff for their service to our local community,” said Mayor Pradeep Gupta.

Azzopardi was appointed South San Francisco Police Chief on September 23, 2014. He started his law enforcement career with the South San Francisco police department in 1993. Over the course of his career, Azzopardi has risen through the department ranks service as Corporal, Sergeant, Lieutenant, and ultimately Captain in 2009. As a Captain, Azzopardi led both the Operations Division, as well as the Services Division. Azzopardi’s experience, along with his collaborative leadership, provides the ideal foundation for partnerships with the community to make sure that South San Francisco remains one of the safest cities in the Bay Area. Azzopardi is a graduate of the Los Angeles Leadership Academy, holds a Master’s Degree in Public Administration from Notre Dame de Namur University and a Bachelor of Arts degree in Public Administration from Chico State University.

POST establishes standards and training requirements for police officers as they progress through their career and promote to ensure the development of well trained and professional officers. The POST Executive Program is an optional course of leadership and management training available to Chiefs of Police. Few in California successfully complete the program and are awarded the POST Executive Certificate.

POST was established in 1959 by then Governor, Edmund “Pat” Brown, with the sole purpose of standardized law enforcement selection and training in the State of California. POST serves more than 615 law enforcement agencies and 79,000 police officers throughout the state. POST maintains 40 academies, offering 4,000 training courses from basic to executive training.

← SSFPD Do You Know Me: Wallet Thief Victimizing the ECR Corridor in SSF
South City Coyote Sightings Around Town →