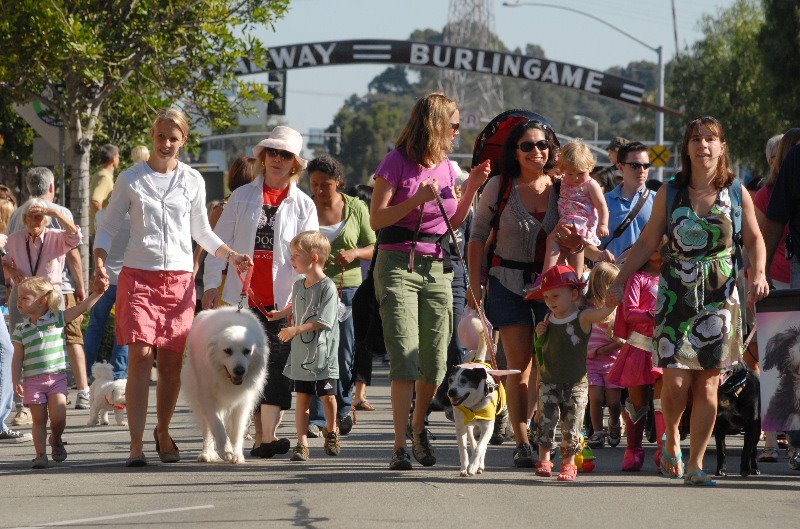 This years Pet Parade will be on Saturday, September 23rd, 2017 at 10:00am Pet owners and their pets are invited to march in this family friendly event, which features a costume contest, best pet trick and cash prizes for the best school floats
More than 1,800 spectators and 600 participants turned out for the 13th annual Burlingame Pet Parade, which took place on September 24, 2016. The parade was led by St. Paul’s Nursery School. The parade marshal was Sunshine, a 7-year-old Beagle mix belonging to Assemblyman Kevin Mullin and his wife Jessica. Music was provided by the Burlingame High School Marching Band, the Los Trancos Woods Community Marching Band and the San Mateo Elks Concert Band.
For details on this year’s contest winners, including photos, see the “2016 Parade” page. For more photos visit our Gallery.
The parade will assemble in Parking Lot Y on Chula Vista near Broadway, adjacent to Pick of the Litter. Those who wish to march in the parade must be there by 9:30 a.m. on September 23, 2017. The parade will march up Broadway from Chula Vista to Capuchino, where it will turn right and circle back down Broadway. The entire parade consists of a leisurely stroll that lasts about 30 minutes. Final judging will take place and prizes will be awarded immediately after the parade in front of Broadway Grill at Broadway and Capuchino.

We are grateful to this year’s parade sponsors: The Broadway Merchants Association, The City of Burlingame, The Peninsula Humane Society & SPCA, Pet Food Express, The Daily Journal, The Alan Canas Tram of Realtors, Korody Business Services and Colorprint.