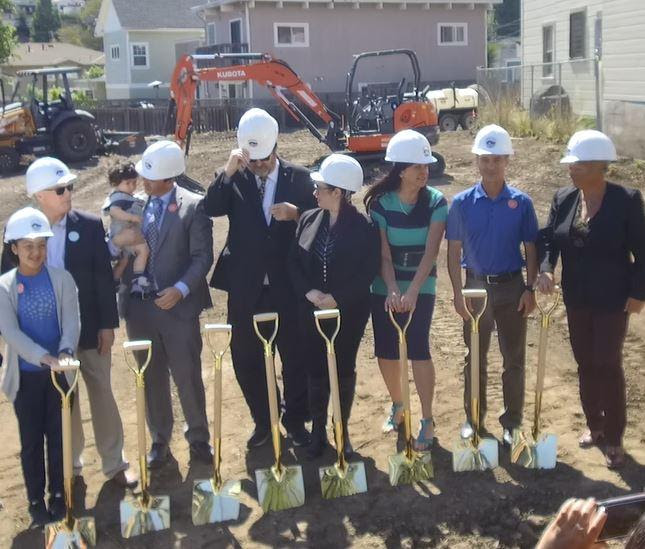 Dozens gathered this morning in Brisbane’s downtown drag on Visitacion Avenue to see the ground get officially broken for the New Brisbane Library. This Library has been a project the City first began exploring in 2000, when a Library Needs Assessment was conducted. A second assessment was conducted seven years later by the same firm, this time using the footprint of the selected site on Visitacion.
Still, it wouldn’t be until several years after the 2008-2012 Great Recession that the City Council would re-focus its efforts on the Library project. Having opened in 1981, the current Brisbane Library has served community members and library patrons for 37 years, tucked on the second floor of the City’s Community Center located at 250 Visitacion Ave.
But today, a block and a half down Visitacion, attendees looked beyond the construction fence currently located at 163 Visitacion Ave., the former location of the 5 Star Café, with great anticipation. Brisbane Mayor W. Clarke Conway welcomed gatherers to the Groundbreaking Ceremony, speaking further about the history of the Library Project. Having first been elected to the Brisbane City Council in 1993, he has seen the Library’s beginnings and finally, today, the start of its construction.
“This facility is going to be a huge asset to our Community,” remarked Mayor Conway, “providing three times the square footage as the current library, incorporating our City’s first-ever public art display, History Room, environmentally-progressive design such as lots of natural light, low-VOC or eco-friendly carpets, and a 5,000 gallon rainwater cistern which will result in a 77% reduction of indoor water use. There’s also going to be something for everyone, including, what I’m most looking forward to, a Makerspace, where kids can do more tinkering and actually use their hands to build things; they just might discover interests and hobbies they might otherwise not known they had.”
The Mayor concluded his remarks acknowledging all the support the City received from the County of San Mateo, with former Sup. Adrienne Tissier being an advocate for Brisbane receiving funds through Measure K for the library’s design work, along with a $1.7 million low-interest loan, with current District 5 Sup. David Canepa responsible for shepherding both of them through.
“Libraries are places to read, to meet, to gather, to collaborate, to build, and to dream,” said Supervisor Canepa. “One of our goals at the County is to see the literacy rate rise and libraries are part and parcel to achieving that. I am honored to be here today for this exciting moment in this Library’s history, and cannot wait to visit what will be North County’s newest, state-of-the-art facility that will serve its residents for generations to come.”
Brisbane residents have been a part of the library’s design phase from the onset, when a Library Planning Stakeholder Group was formed in 2014 for helping make the dream of a new library a reality. This group is comprised of representatives from the Friends of the Brisbane Library, the Mothers of Brisbane, San Mateo County Libraries Staff, the Brisbane School District, the Brisbane Educational Support Team (BEST/PTO), one City Councilmember, a Parks and Recreation Commissioner, City Manager Clay Holstine, and Public Works Director Randy Breault. This group went through the process to select the architect, where ultimately, design firm Siegel & Strain was selected in April of 2016 for their award-winning work in designing the LEED Platinum Portola Valley Library, Town Hall, and Community Hall.
The New Brisbane Library is scheduled to open in the Fall of 2019, in time for the 2019-20 school year. Please visit www.smcl.org and www.brisbaneca.org to learn more about this exciting project!