The past few months have been a wild ride as we all have felt the impact of this historic shelter in place due to the worldwide pandemic. Stress is at an all-time high with unemployment rates soaring, parents being turned into instant teachers, social activities being canceled from visiting family and friends, and recreational to religious events, leaving an overall feeling of what is to come next? What does our future look like?

And then a cop in Minnesota kills a suspect that was to be in their custody. White cop. Black suspect. And the world goes darker.

Many South City residents, feeling the anger and wanting justice, came together in a peaceful demonstration with full support from local officials. The downtown business area was boarded up with police at every corner to ensure outsiders did not come in to cause damage as we’ve witnessed in other areas. Locals proved we could *RISE UP TOGETHER to have our voices heard, peacefully, with some later establishing groups to bring ideas of change to our City Council. 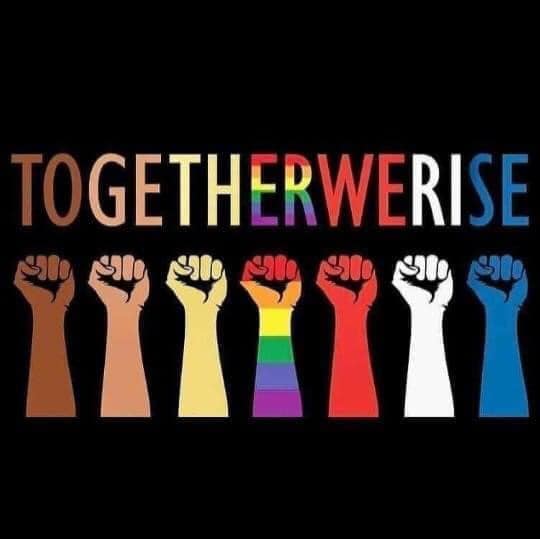 *On June 3rd, residents of South City came together peacefully to protest the wrongful death of George Floyd at the hands of a MN Officer.

And then, last Sunday, the backlash against local police reared it’s ugly, angry head on Everything South City’s Facebook page compelling me to respond with a firm ‘Dear Community‘ message which ended up becoming a lightning strike for more anger and hate. This experience taught me a few things I’d like to share.

The biggest lesson was realizing the importance of sharing the backstory, putting the ‘Dear Community‘ message in context with the ugliness of what had occurred on our FB page. Far too many read my post as against the protests, or more clearly, against the Black Lives Matter movement, and in favor of all police officers. They saw it as an either/ or and I realized the disconnect I had helped create by not sharing the backstory.

Earlier that day we had shared the message from the San Mateo County Sheriff’s office of a planned peaceful demonstration for that evening. A few hours later I came back to see that post had many comments, and I was shocked at what I read. {*This was the same day that the young Officer in Santa Cruz was ambushed and killed, which was only one of the recent ‘cop killing ambushes’; Dallas, Baton Rouge, }.  The first person decided to ‘re-write’ the Sheriff’s message into something very negative while adding ‘There I fixed it!’, to which others chimed in hate for police in general. In time, a few others came on to post violent memes with specific Officers names, vile and hateful, and no place for them on our page, or actually anywhere.

Our policy that was created ten years ago does not allow any of our admins to delete posts, rather we reserve the right to ‘hide’ post as is clearly stated on our page, under the ABOUT section. {Posts deemed to be inappropriate may be hidden from public view} So that evening the hate speech was hidden from public view.

Monday morning brought about a new slew of hate, again with memes directed at our local department, and once again, as we do not tolerate hate speech, those comments were hidden from the public view. And my ‘Dear Community‘ post was published, which included the American flag in black with the thin blue line, symbolizing what the police are commissioned to do.

However, with all the hate speech hidden from public view, no one would understand where the ‘Dear Community’ post was coming from, hence this follow up post today.

Lesson number two: I learned not everyone today sees this flag in the manner in which I’ve historically known it, as described by Wiki: ‘The “thin blue line” is a term for the police that is used to assert that they are the line which keeps society from descending into violent chaos. The term began as an allusion to the British infantry regiment The Thin Red Line during the Crimean War in 1854.’ 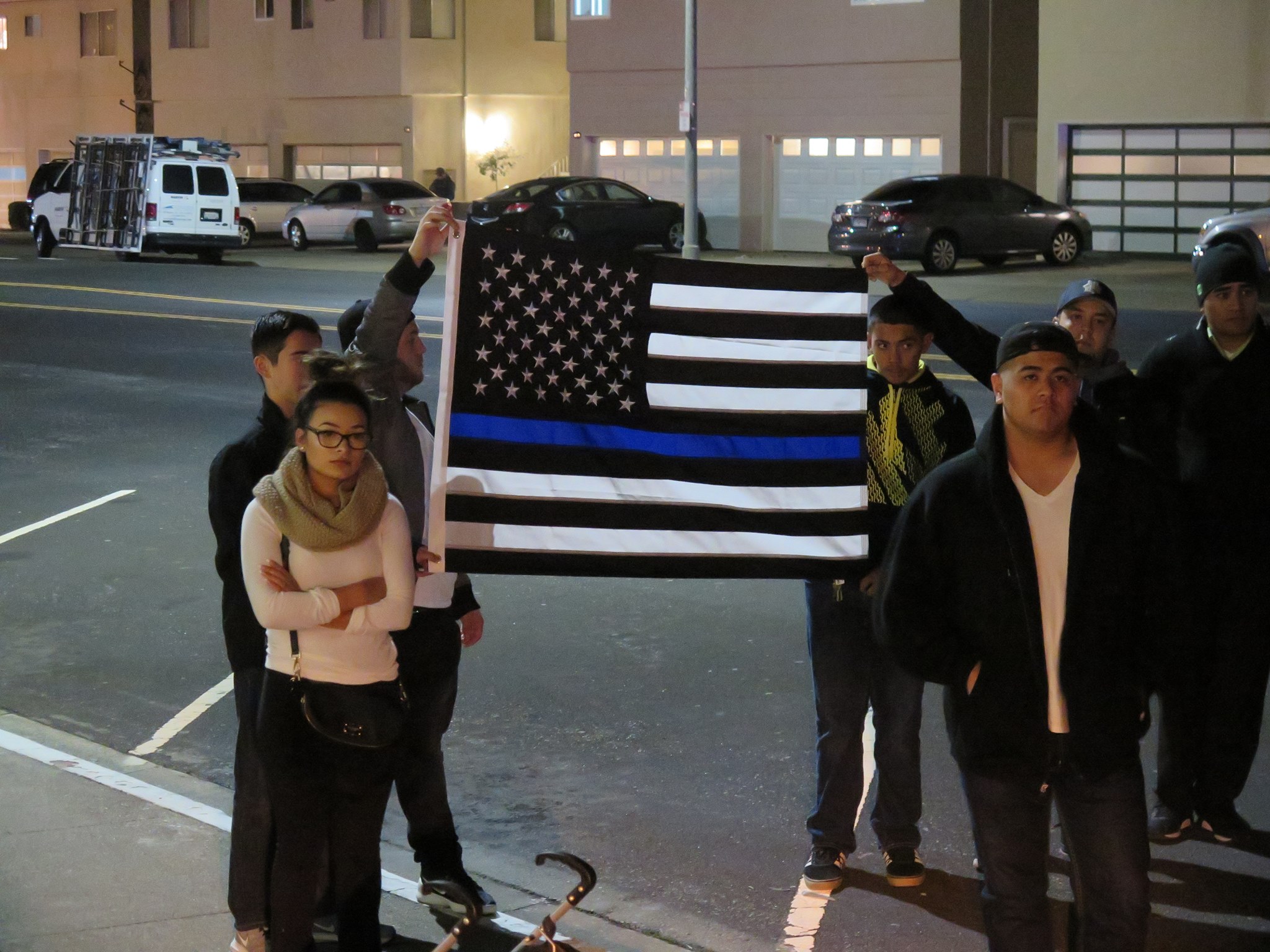 ** In late Nov 2016 the Thin Blue Line Flag was an acceptable sign of support during the Candle Light Vigil for Officer Chon after he was beaten by a suspect in SSF. https://wp.me/p2ZEBO-4iK

However, further scrolling down Wiki’s page shows as of 2015 this symbol has another meaning to some, ‘Critics suggest that the “thin blue line” symbolism represents an “us versus them” mindset that heightens tensions between officers and citizens and negatively influences police-community interactions,[10] by setting police apart from society at large.[11]) 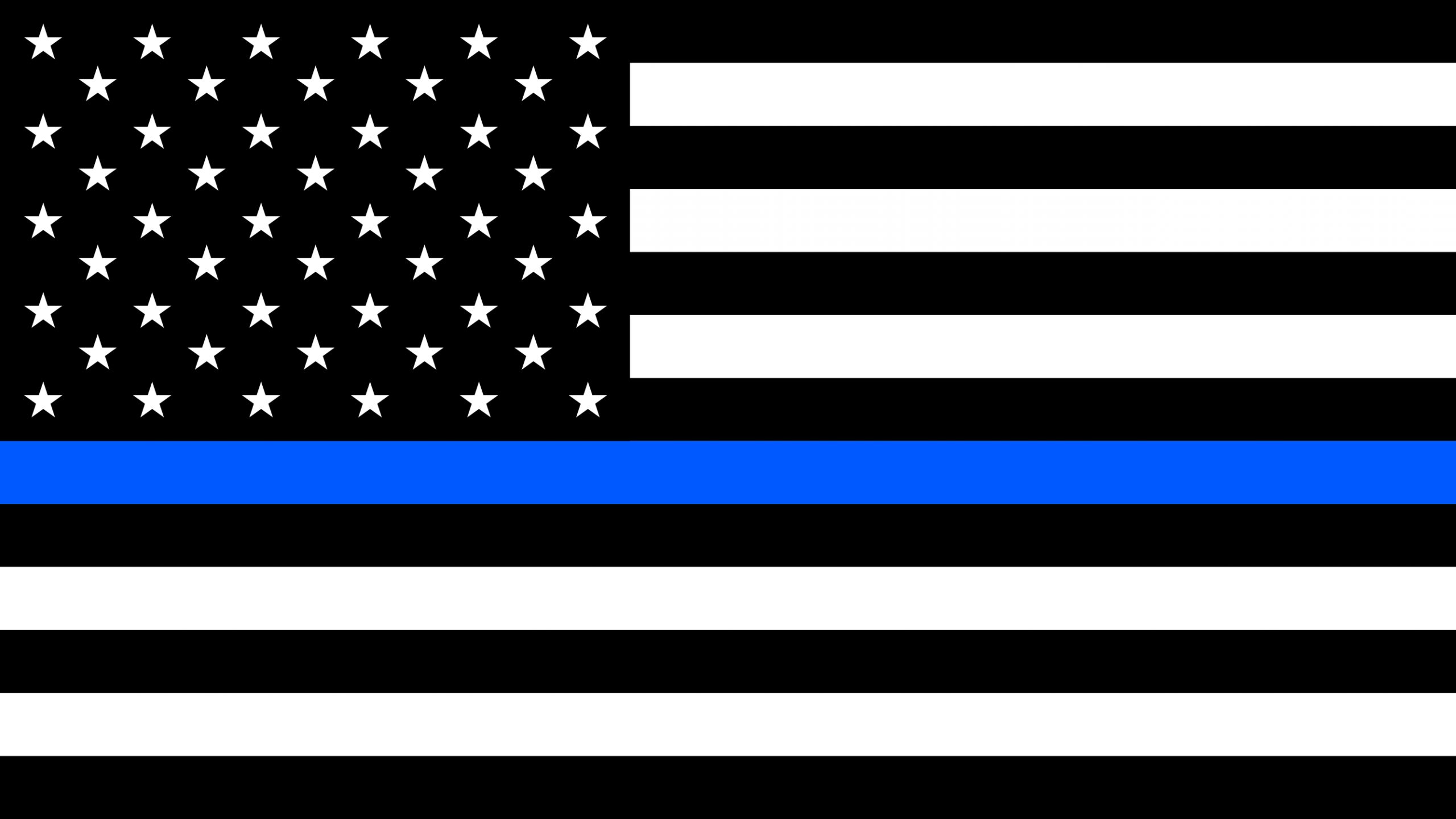 **” “This flag has been shrouded in controversy. So much so that the San Francisco Police Department was recently band from wearing “masks” that depicted this flag on them. These masks were purchased by their police union, not the actual officers or city.” Ralpheal wrote on ESC FB, working to educate us all.
“If Mayor London Breed doesn’t think it’s good enough to represent the city of San Francisco, I think we should rethink it here as well.”

Had I known that flag held completely different meanings to others today, I would not have used it, and I thank our neighbor Raphael for educating me on this issue in a constructive manner. It took a few hours and thankfully one of our admins was able to successfully remove the image while leaving the post, as again, we do not delete. Yet the hate speech continued forcing one post after another to be hidden from public view and banning those who continued to do so. It was an exhausting two days.

So, why am I writing this?

Because I believe the backstory is important, especially after reading the comments and recognizing the absence of it really created chaos which was not intended nor needed by any of us. And to share the education I received regarding varying opinions of the message behind the thin blue line flag.

I learned a long time ago that Everything South City is an entity of its own, it is not meant to be my voice, rather a place of sharing information, neighbor to neighbor, and in ten years it continues to successfully accomplish our mission. ESC was created to be a place where the community could respectfully share news and views but there is no place or tolerance for hate at any time, and I continue to stand firm on that issue. As stated in my ‘Dear Community‘ post, there are so many social media sites that welcome the hateful angry attitudes and speech, yet be advised, it is not welcomed on our platform, and comments that violate that spirit will continue to be hidden. In all of our years on social media, we’ve seldom had the need to hide posts or ban commenters which is a reflection of the true values of our community, and for that we are thankful.

These are historical times; medical concerns of the virus and pandemic, the loss of freedoms and finance caused by the shelter in place mandates, the civil unrest. It all can be unnerving, overwhelming, and it may be hard to see past any of it.

I have no answers, as we all know, yet I do find some solace in my Mother’s last words ‘You have to believe it will get better’.  I do Mom, I do.

Dear Community,
Today more than ever our finest Police Officers need our support and respect and Team Everything South City stands with them.
We will not tolerate negative comments or ‘rewriting’ of outreach that our local law enforcement departments put out for the public.
Period.
We will not allow the horrific actions of some officers to tarnish the name or work being done by those who are working hard to protect and serve us all.
There are so many social media platforms that embrace the hate, we are not one of them. Do not bring it here, we will be hiding those comments and banning those from our page who cannot adhere to this basic request of civility.
Thank you.
Kamala Silva Wolfe, ESC Founder/ Editor

Thanks for this thoughtful post. I really enjoy this site and appreciate your effort.

what you failed to realize, is that the
bleeding heart liberals are just as rotten
as the right wing lunatic fringe, no
better, no worse, so the easeist way, is
let them kill each other, and be done with
them, or hope.mother nature comes up
with a super virus, that will purge the
human race