In July of 2020, South San Francisco Police began investigating an assault, firearm brandishing and gang intimidation case of a local male resident in our Old Town neighborhood. As a result of the investigation, detectives executed arrest/search warrants and took two gang members into custody. During the service of the search warrants, detectives recovered gang indicia and seized a loaded stolen assault weapon with a high capacity magazine.

In August of 2020, South San Francisco Police began investigating an armed robbery of a local female resident in our Brentwood neighborhood. The suspects, armed with firearms, knocked the 63-year-old victim to the ground and attempted to steal her purse. The assault caught the attention of witnesses and the suspects fled the area. Investigators began following leads and identified a person of interest who was wanted on an unrelated assault with a deadly weapon case.

Investigators located and arrested the suspect without incident. A search of his vehicle revealed a non-serialized illegal assault weapon with a loaded 100 round drum magazine. 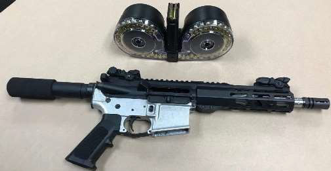 Both cases remain under investigation. The men and women of the South San Francisco Police Department remain committed to fighting crime and keeping our community safe.

GREAT JOB SSFPD!
So sad we have some residents and organizations such as “Change SSF” wanting to defund our Great Police Department. It’s actually disgusting.
Keep Up The Good Work.

and guess who are the loudest to
scream police brutality? remember
folks those are are clamoring to
“defund the police”, are the very same
criminals, its your safety & lives,
vote accordingly & SUPPORT YOUR
POLICE

I just wonder about the people who want to “defund the police” and who they would call if they need help. I would like to thank the men and women of the police department who do take care of all of us! It’s important to have rules and regulations for the 99.5% of us!

We expect SSFPD to investigate cases like these. We don’t need them in schools, mental health crises situations, and wellness checks just as was indicated by the Commissioners on Racial and Social Equity and public comment.