During a later probable cause search of the vehicle, the occupants were asked to step out of the vehicle. During a pat-down search for weapons, an unregistered AR-15 style assault weapon was located in one of the occupants’ waist band. The weapon had a detachable magazine loaded with 24 rounds, and one round was in the chamber. 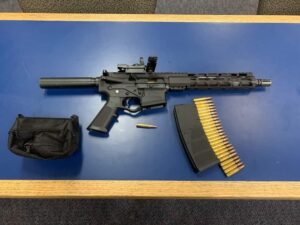 Both occupants were safely detained, placed under arrest for various unlawful firearm related offenses and booked into the San Mateo County Jail. This investigation is continuing. Great proactive work by South San Francisco patrol officers in removing an illegal assault weapon and from the streets and stopping a potentially dangerous situation.

This goes to show, there is no such thing as a “routine traffic stop”. Great work!”

Now our council members are talking about police no longer making traffic stops because they’re deemed racist. We as community members better wake up and speak out against these ideas. SSF is turning into a big shithole. The whole state is feeling it. This assault rifle was taken off a guy during a traffic stop. SSF police prevent soany violent crimes by being pro active not by being racist!

My recent interactions with SSFPD have mostly impressed me. I’ve been seeing them come out to the park more and playing with the kids instead of looking at them like potential suspects. I have seen some officers have shifted their perspective and feel like more of a part of our community as opposed to people to tell my brown kids to stay away from.

Thank God the officers were safe! Thank you so much SSFPD for keeping South City a safe and close-knit community. God bless all of our first responders!

KEEP SSF SAFE, arrest and hang the
trash from SF and the East Bay, make
examples of these assholes

Thank you so much SSF Police officers! Great job keeping us all safe.