The UOE Stationary Engineers, Local 39 continues on strike at Kaiser in South San Francisco, today marking the sixth week the Union has been working towards a contract to ensure cost of living increases. Last Friday, a federal Mediator met with the Union (Local 39) and Kaiser. No progress was made, nor have any future meeting dates been set at this time. The strike began on September 17th, and Kaiser offered a September 19th press release on its website HERE  noting they still remain open to members and patients. 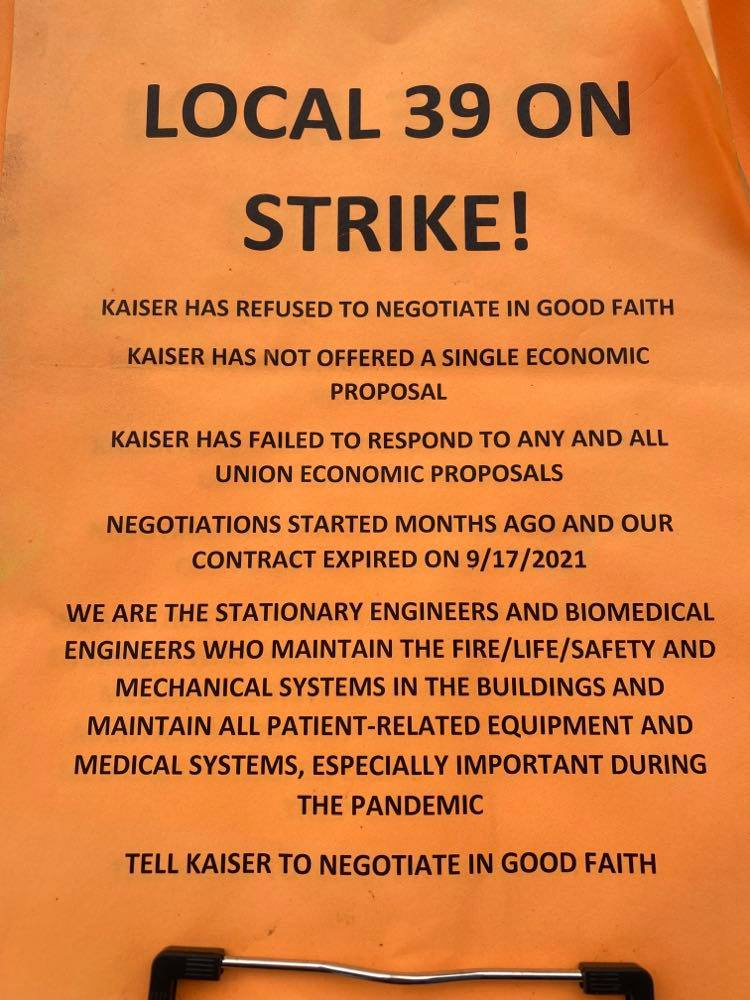 The SEI-UHW has stated Kaiser made $11.4 Billion since the pandemic began. Kaiser has offered a 2% raise which was rejected by the union, they had asked for 5%. Union workers explain that Kaiser has not been budging on wages, and without a fair contract, their current Union workers would become the lowest paid hospital Stationary and BioMed Engineers in the San Francisco Bay Area. 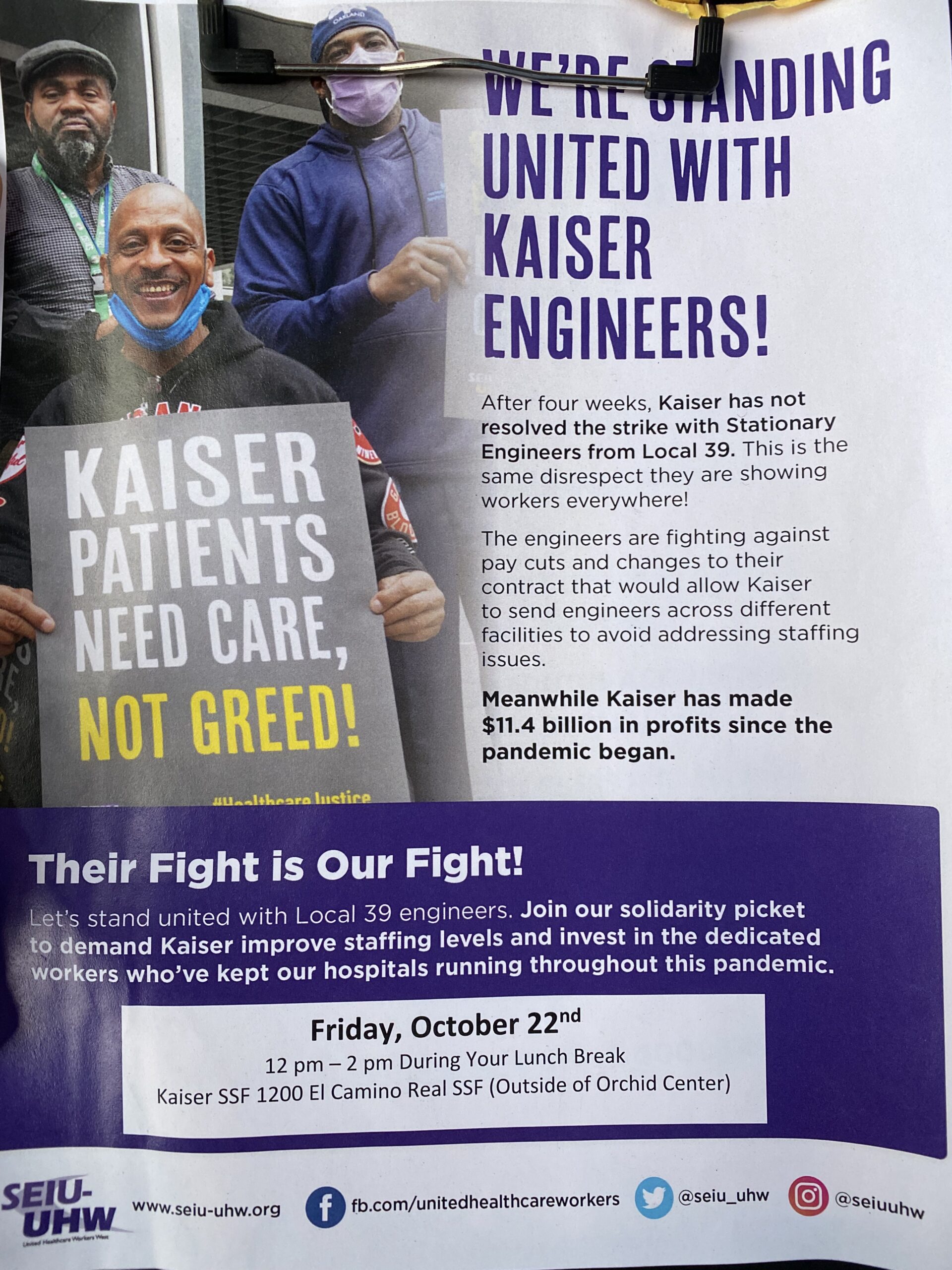 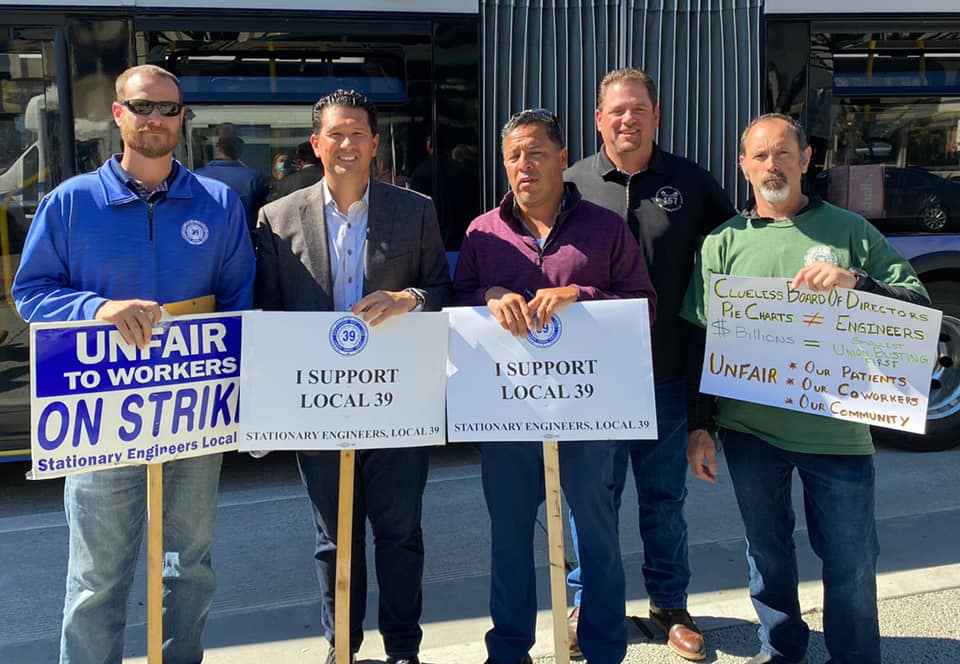 On September 30th San Mateo County Supervisor President, David Canepa, joined Union workers on the picket line in support. This past Wednesday they were joined by the California Nurses Assocation and Friday, from noon to 2PM there was a rally from the from the SEI-UHW United Healthcare Workers 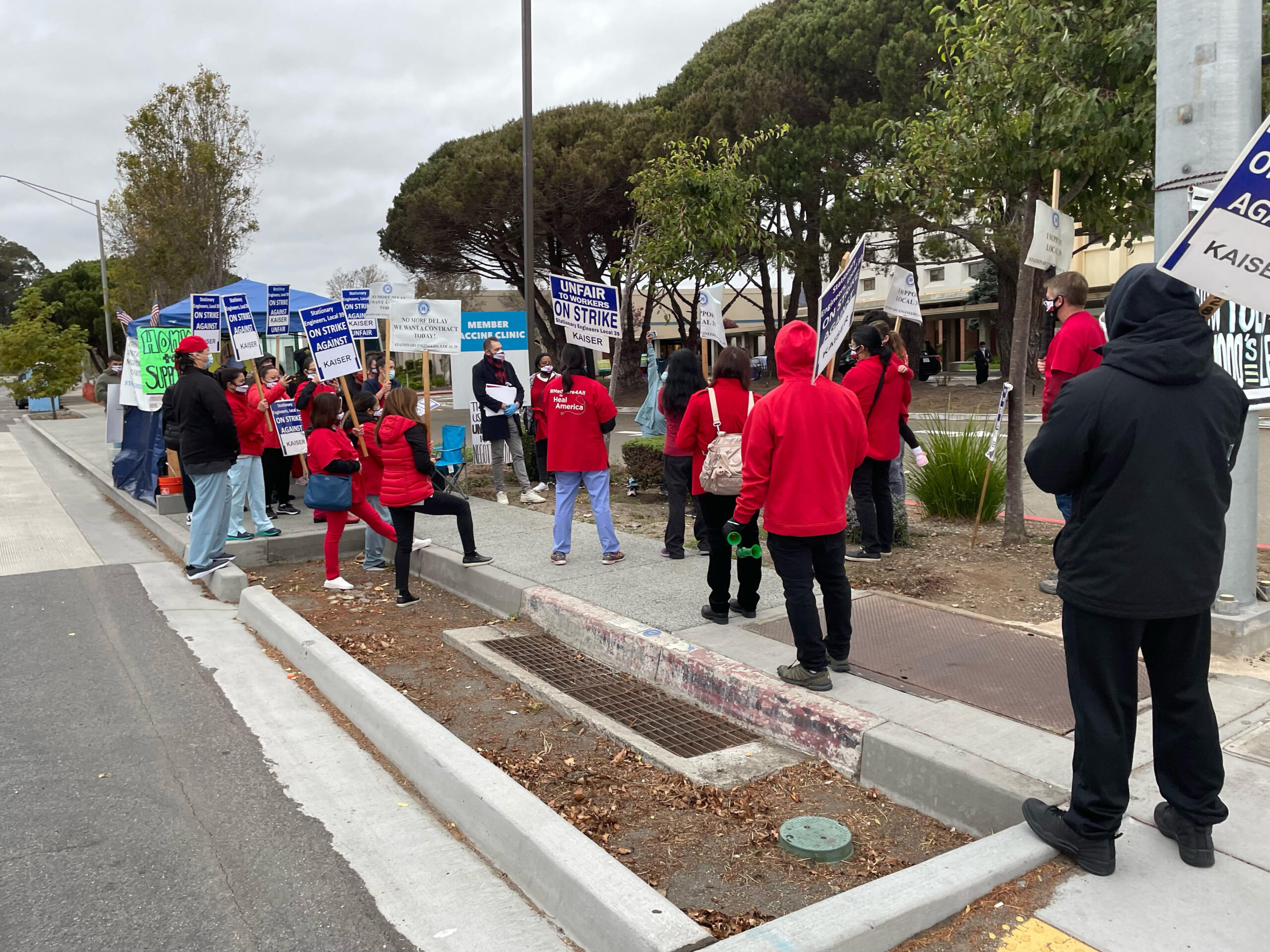 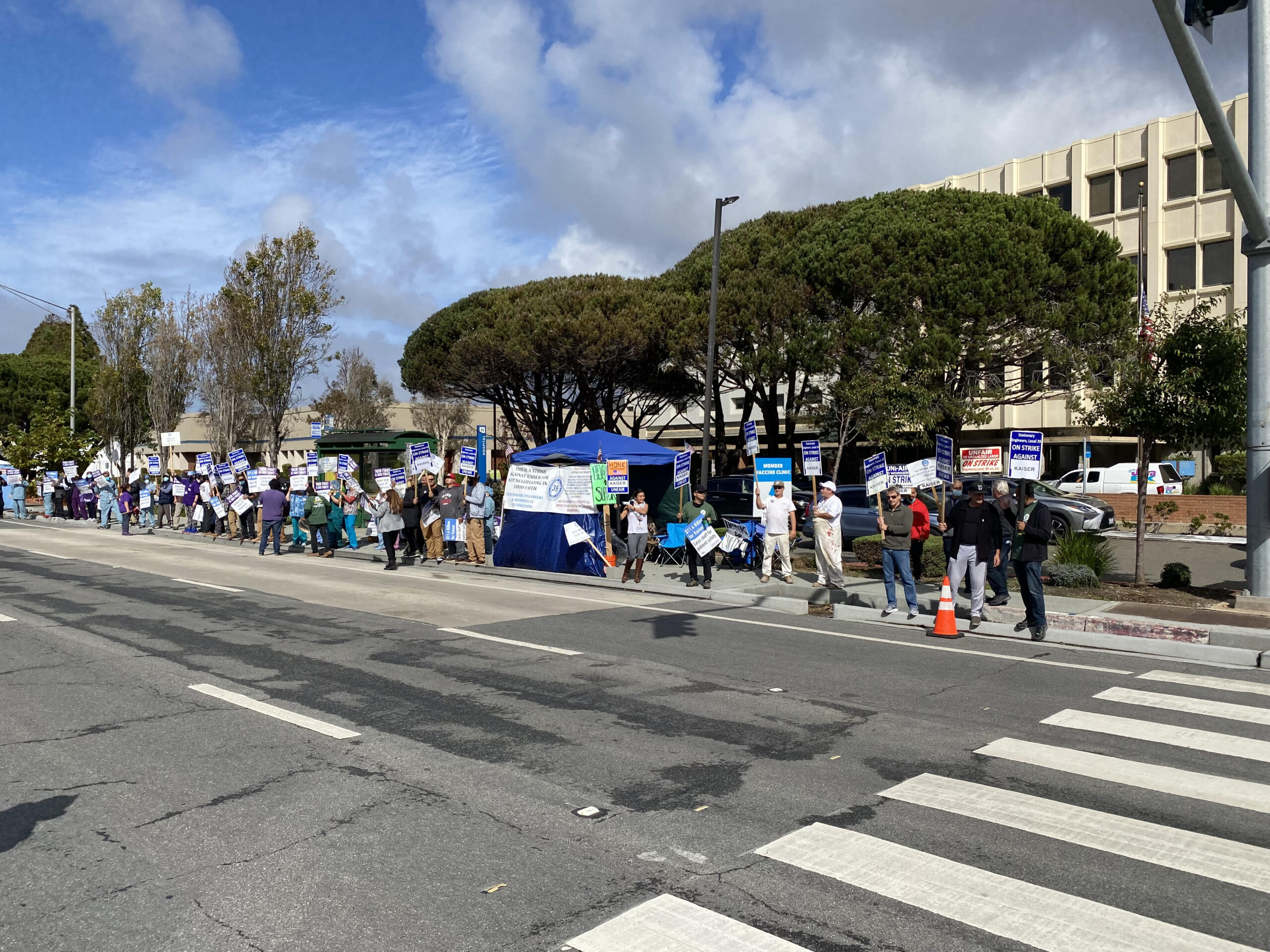 The SEI-UHW United Healthcare Workers joined in support at a rally last Wednesday.

In addition, many who pass by Kaiser honk in support of the Union workers strike although some mistakenly believe the strike relates to vaccination issues. ‘This strike is NOT about the vaccination‘ an inside source assures us. “All but one of our members has been vaccinated per medical recommendations. This is about cost of living increases that are necessary.”

There are 18 members of Union 39 at South City Kaiser, and are working the picket line 24/7 even in the recent storm. 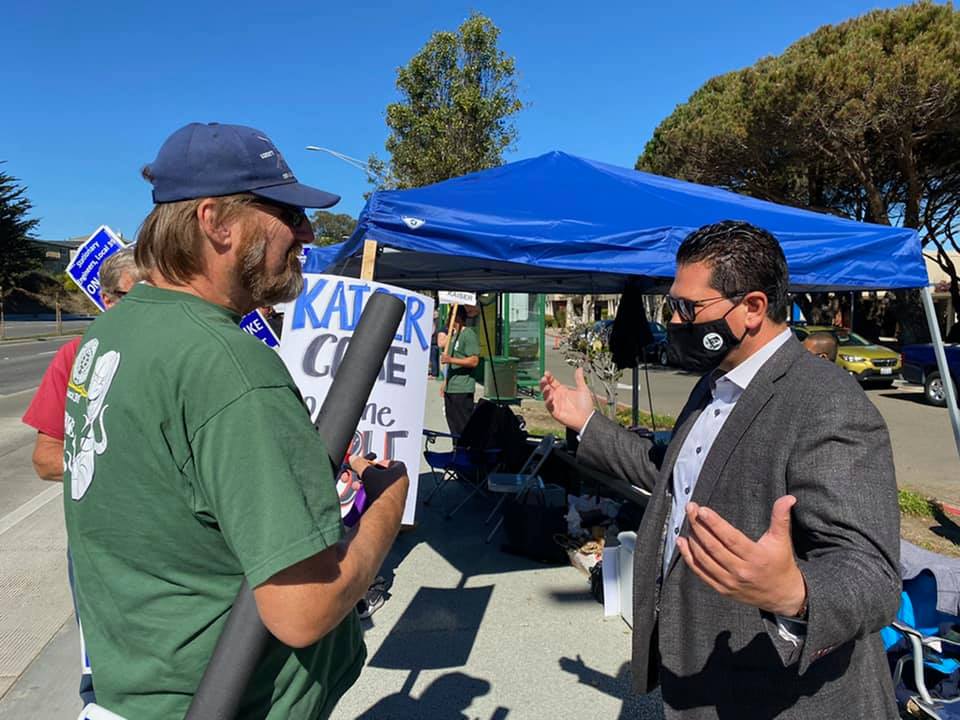 The International Union of Operating Engineers (IUOE) was organized and established on December 7, 1896 as a craft labor Union with two divisions.  The first is Hoisting and Portable Engineers, men and women who work predominantly in the construction industry.  The second is the Stationary Engineers, men and women who operate and maintain the physical plant systems in buildings, hotels, schools, hospitals and like facilities.

Local 39 actively fights to improve our members’ quality of life on and off the job, through access to fair wages, good benefits, safe working conditions and solidarity among members. Our members are our Locals – regular people who expect to earn decent wages and benefits for our hard work and commitment to getting the job done right.

Once in the Union, our members get the best contracts possible.  Local 39 members who need the Union’s assistance receive immediate attention.  Representation is provided by a highly trained, full time staff of Business Representatives and attorneys who are specialists in public and private sector employer-employee relations.  These professionals are responsible to bargaining units and members for all components of the representation process.  From first level grievances and contract negotiations, to rights or interest lawsuits, Local 39 is a full service Union.

Local 39 conducts a complete training program open to all our members.  Our training program is a model copied by other Unions and recognized as second to none throughout the United States and Canada.

Stationary Engineers, Local 39 exists to provide for the general welfare of its members and to improve the economic position and conditions of employment for its members, their families and workers everywhere.

← What Animals Are Legal To Own In California?
National CAT Day – GAME ON! Send Pics of your Kitties! →
0 0 votes
Article Rating
Subscribe
Login