“The only one who cares about campaign signs are the candidates!” an old timer in South City said years ago. And that statement is closer to truth than fiction, yet for good reason. The campaign signs are a great expense and generally are placed in areas with agreement of the owners who are supporters of the campaign. 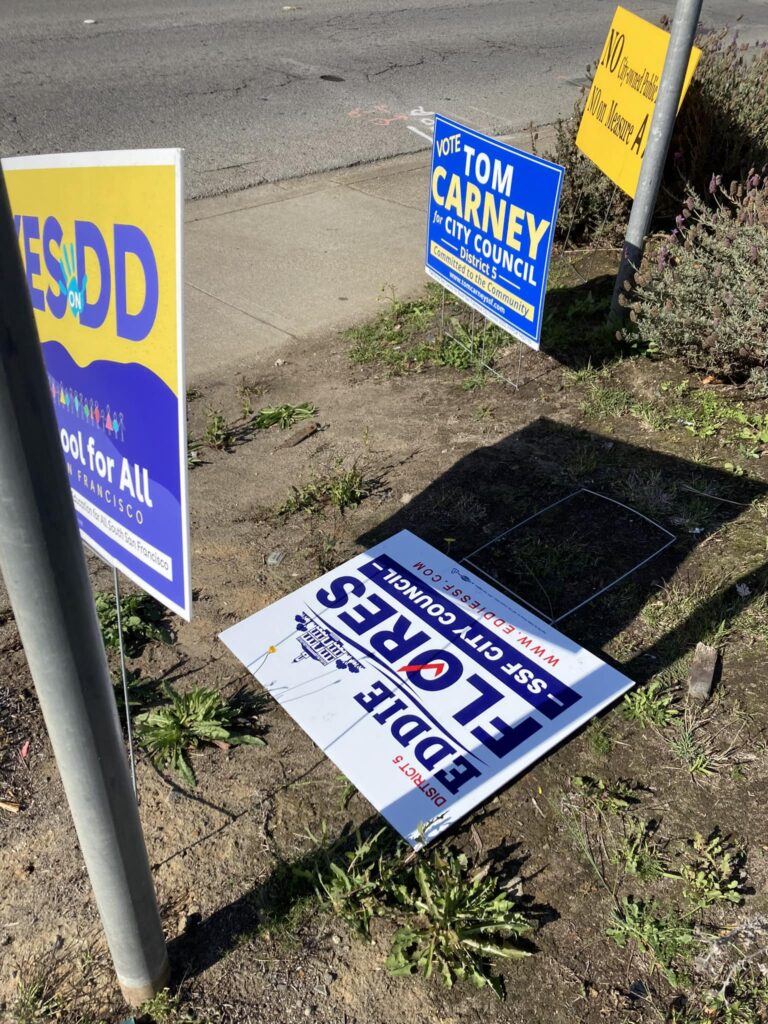 Those who are vandalizing campaign signs must stop. 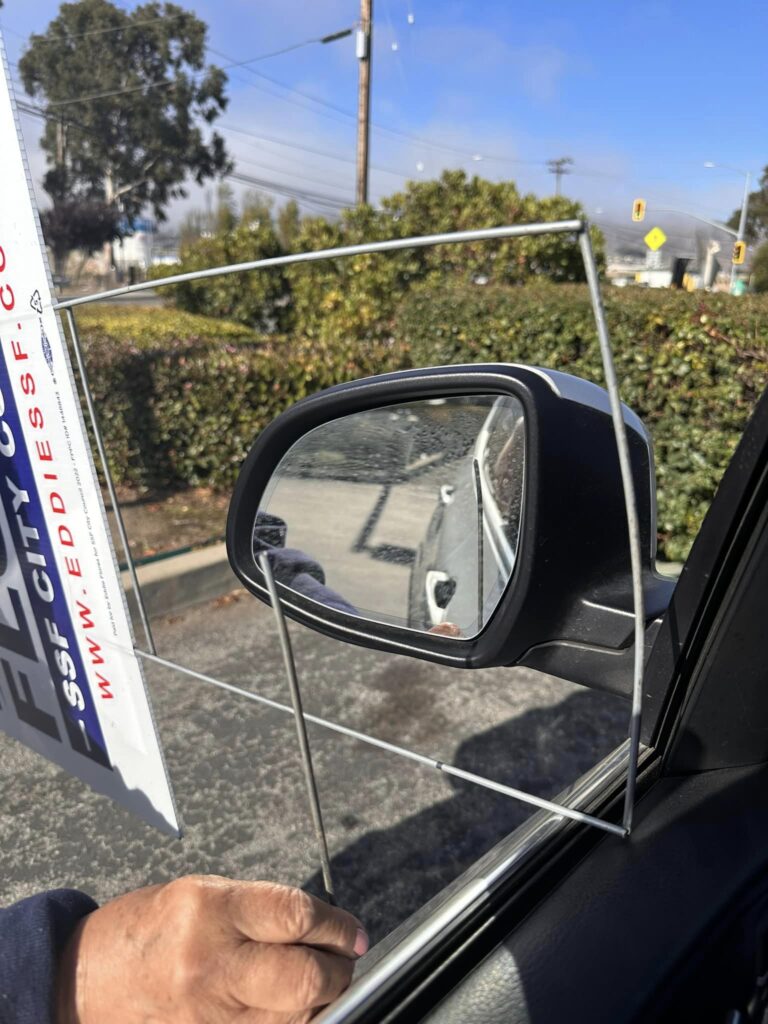 Flores notes South City winds might be strong, but they didn’t do this damage.

Last evening we had a local candidate publicly post to social media taking to task anyone interfering with signage after finding one of their campaign signs knocked over and others removed from wires. To date we have had three other candidates report their signs have gone completely missing that were placed on private property with the owners permission. Back in 2007, in Burlingame, a similar situation of missing signs became an issue of embarrassment that eventually involved police.

UPDATE 10/11/22: The photos below show the vandalism being done to candidate signs. Candidate Tom Carney states he has reported this to SSFPD and encourages others to do likewise 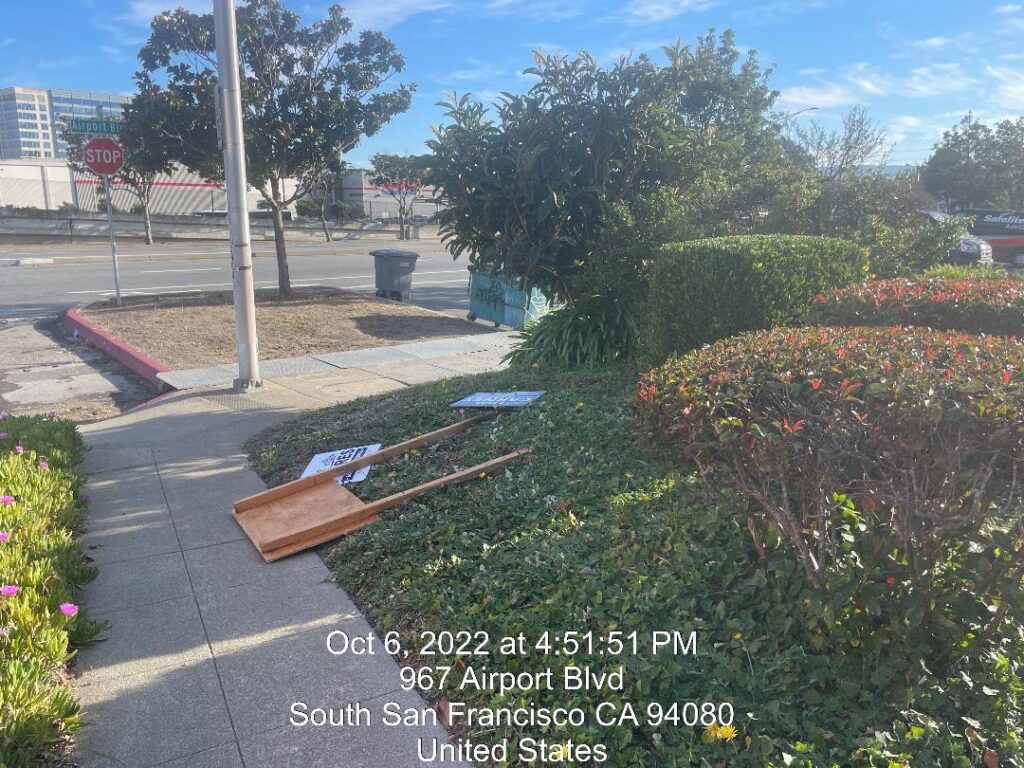 Candidate Tom Carney has been reporting vandalized signs to SSFPD the past 3 weeks, agreeing this willful destruction must stop. 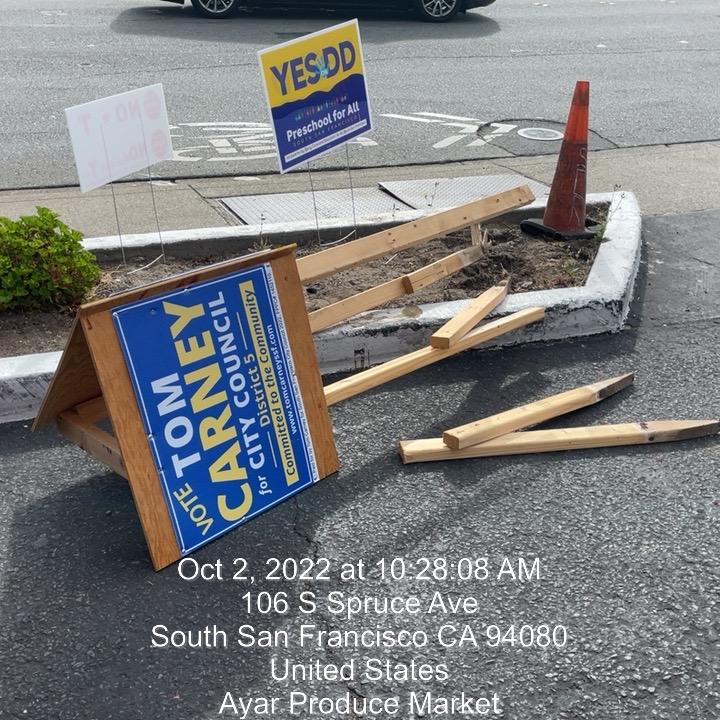 While sign tampering is nothing new, it is illegal. Also illegal is the posting of signs on public property which we see a lot of every year, causing blight because those signs are generally not picked up after the election. We can see a lot of the campaign MEASURE signs are haphazardly placed everywhere, especially on public right-of-ways.

Any paid political advertisement that refers to an election or to any candidate for state or local elective office and that is contained in or distributed with a newspaper, shall bear on each surface or page thereof, in type or lettering at least half as large as the type or lettering of the advertisement or in 10-point roman type, whichever is larger, the words “Paid Political Advertisement.” The words shall be set apart from any other printed matter. As used in this section “paid political advertisement” shall mean and shall be limited to, published statements paid for by advertisers for purposes of supporting or defeating any person who has filed for an elective state or local office. EC §20008

Business and Professions Code 5405.3 “5405.3 Temporary Political Signs. Nothing in this chapter, including, but not limited to, Section 5405, shall prohibit the placing of temporary political signs, unless a federal agency determines that such placement would violate federal regulations. However, no such sign shall be placed within the right-of way of any highway or within 660 feet of the edge of and visible from the right-of-way of a landscaped freeway.

(a) Encourages a particular vote in a scheduled election.
(b) Is placed not sooner than 90 days prior to the scheduled election and is removed within 10 days after that election.
(c) Is no larger than 32 square feet.
(d) Has had a statement of responsibility filed with the department (Department of Transportation) certifying a person who will be responsible for removing the temporary political sign and who will reimburse the department for any cost incurred to remove it.

Click on this link for more information on the Department of Transportation – Political Signs.

The City of South San Francisco respects each candidate’s right to free speech, as well as our residents and business owners. The city adopted a sign ordinance that regulates signs, which includes “non-commercial messages” signs that are used for elections. This FAQ has been put together to help you navigate through our new sign ordinance.

When Can My Temporary Campaign Signs Go Up? 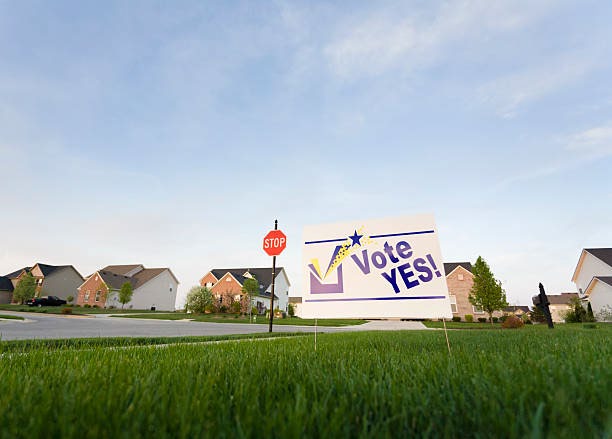 Am I Allowed to Place My Campaign Sign on the Sidewalk or Road? 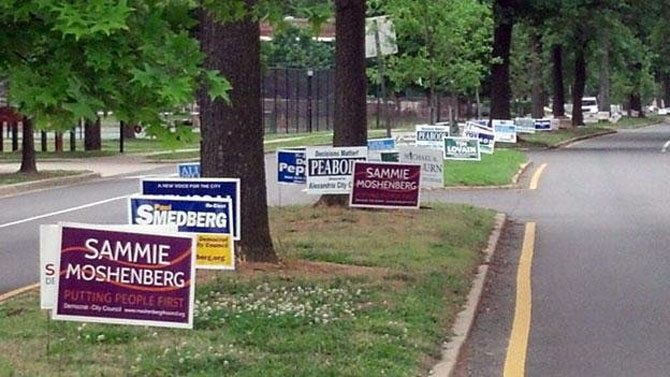 No, Political campaign signs are not allowed within the City’s rights-of-way and will be removed by city staff at any time.

This typically includes the street, sidewalk, and any medians or landscaped areas between the street and the sidewalk.

Can I Place Campaign Signs at City Parks and Open Space Areas? 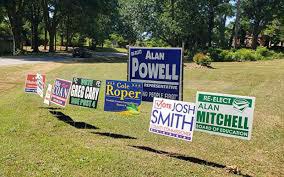 No signs are allowed on the city-owned or maintained property and may be removed by city staff at any time.

Can I place Campaign Signs on Vacant Lots, Walls, or Fences?

Yes, but you must have the property owner’s permission and must abide by the maximum sign area of 24 square feet.

When Must My Campaign Signs be Removed?

All political campaign signs must be removed no later than ten (10) days after the election (November 18, 2022).

If you have any additional questions, you may contact the South San Francisco City Clerk’s office at (650) 877-8518 or email us at all-cc@ssf.net.