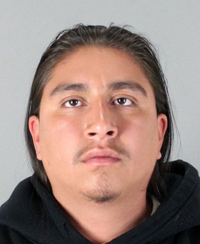 Ivan IBARRA (aka: Tweety) should be considered armed and dangerous

YOUR HELP IS NEEDED!

Please share this photo and information and help get the word out around town. Keeping our city safe is up to all of us. Thanks!

On 05-19-13 at approximately 8:44 PM, several shots were fired into an occupied vehicle parked on the 300 block of Susie Way in South San Francisco. Vehicles were seen fleeing the scene of the shooting.

Two of the four suspects in the vehicle were apprehended but two of the male suspects fled the vehicle on foot and were not captured. Inside the vehicle, a firearm was located with spent casings. The vehicle was positively identified as being involved in the drive-by shooting.

Ivan IBARRA (aka: Tweety) was identified by officers as one of the subjects who fled the suspect vehicle at the time of the collision. Ibarra is a suspect in the shooting. Ivan IBARRA is now wanted on a NO-BAIL arrest warrant for Attempted Homicide. Use caution when confronting IBARRA. Although a handgun was recovered, IBARRA is still considered armed and dangerous and he has ran from officers on 05/16/13 and on 05/21/13.

Please contact Detective Garcia or Detective Chetcuti of the South San Francisco Police Department at (650) 877-8900 if you have any information.

← Community Youth Talent Showcase On Grand Avenue
Who’s got the best burrito in town? Everything South City friends shout out →