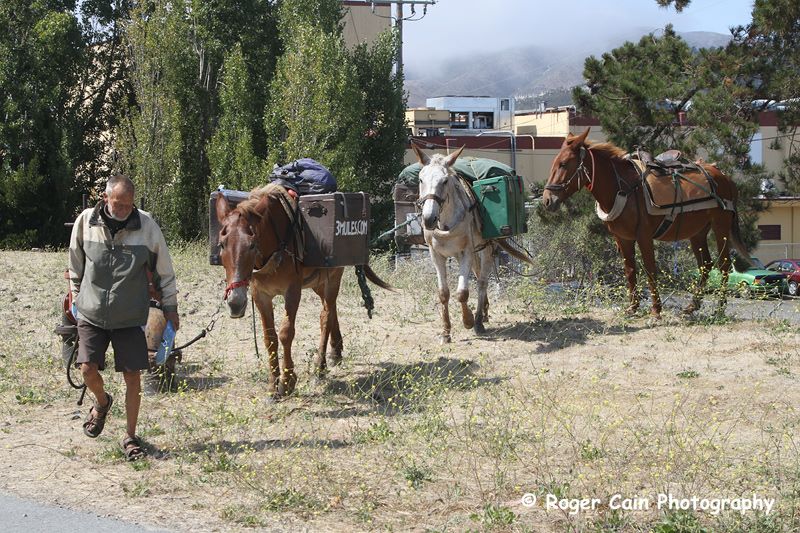 The mules as they make their way through Centennial Trail in South San Francisco, CA.

Today we had a visitor to our city. Or shall we say four visitors? As luck would have it South City’s photographer ROGER CAIN happened upon an interesting sight near Centennial Trail. A man with 3 mules. Bay Area Native John Sears, or MULE as he chooses to be called, along with his 3 traveling companions; Little Girl, Lady and Pepper.

Roger, a professional photographer who specializes in Aerial photography and is featured at Warbird Depot, said “Yesterday I was looking at military tanks, today it’s 3mules.com passing through town. Not often do you see horses on the Centennial Way trail in this city.” When asked if he was able to engage Mule in a conversation Roger explained, “as the website mentions, he is a man of few words.” However San Diego reporter Itica Milanes quoted Mule as stating, “We’re claiming our right to be what we are move freely in all four directions.”

Here is his story as taken directly from the 3mules website to give background to this very unique, and uplifting, passage through our city.  Safe travel Mules. To follow their journey go to the facebook page.

“We are mules. We are from the outside. We live outside all day, every day. We have come to this place — a place of golden sparkling light, a place for anybody and everybody. Give your faith, hope and energy to this place at which time you connect to it and receive the magic and endless possibility of infinity. As you walk in this place with these mules you spread the awareness that this beautiful earth, like no other, can only be protected by the way we live one day at a time.” — The Mules

What’s this all about?

The following is written by John McDonald, a filmmaker who, at no cost to us, helped set up and maintains this website (plus a Facebook page) and is following our journey for a documentary he is making.  We are Mules, an ever-moving place of energy and magic.  This is our website, and is not here to bring us any commercial gain, but to educate, enlighten and inform those who may be interested in what we are doing.  We, the Mules control the content of this site, and John helps with the web design and updates in exchange for our allowing him to make his self-funded documentary.  We share absolutely no business interests.  Thank you.

You spot a somewhat disheveled man with three fully loaded pack mules walking though your community.  What the … ?

This strange and, to many, awe-inspiring sight has been experienced by thousands of people in small towns and large cities throughout the western United States.  But who is he and what is he doing?  Is he lost in the wrong century?  Is he homeless?  Is he on a mission?

The Mules (as he refers to himself and the animals collectively) are often spotted as one passes by in their car, does a double take, and then sees them disappear in the rearview mirror.  Sometimes people catch up to them, snap a photo and try to talk to the 65-year-old man who just likes to be called Mule.  They find that Mule is a man of few words, especially when he’s moving on city streets to get safely to the next destination.

The Mules have traveled for nearly three decades through 16 states.  For the last ten years they have lived outdoors.  Even though he may not talk much when one first meets him, if the time and place are right, Mule will share something that he feels we should all be thinking about.

Throughout their travels, The Mules have noticed an ever increasing urban sprawl.  Open spaces where they once moved through freely, and sometimes spent the night in a secluded spot, were disappearing.  More and more cars filled up the roadways, and the expanding urban infrastructure seemed to serve one purpose:  accommodate more automobiles.  At the same time, space for other means of self- transportation, such as bicycling, horseback riding and simply walking, were shrinking.  Those alternative means of self-travel have often been confined to designated “recreation” areas.  Also, as the urban environment exploded, natural habitats have vanished, or been “preserved” in spaces a fraction of the size they once were.

Mule sums it all up:  “The space needed by The Mules to travel this country freely in all four directions on the landscape is being taken over by the suburban model of automobile usage, exclusively, and leaving no space for alternative venues of moving and living.  In our travels, we carry that awareness and bring it to others.  We’re a working model for that awareness, one step at a time, all day, every day.” 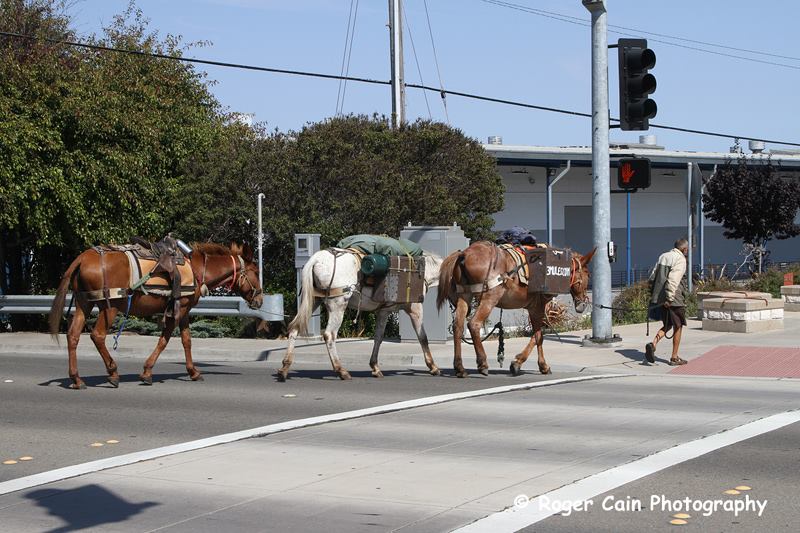 Crossing Spruce Avenue, the 3 mules continue on their travels. “He is a man of few words” comments Photographer ROGER CAIN 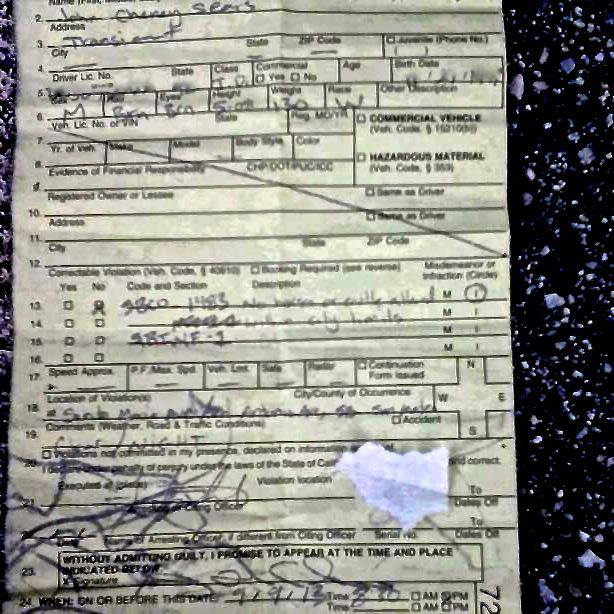 The Mule got busted in San Bruno
BCO 1483: “No horses or cattle within city limits.”

After leaving South San Francisco Mule went onto San Bruno where he was cited by SBPD BCO 1483: “No horses or cattle within city limits.”

San Bruno Police Department are not pursuing the citation. 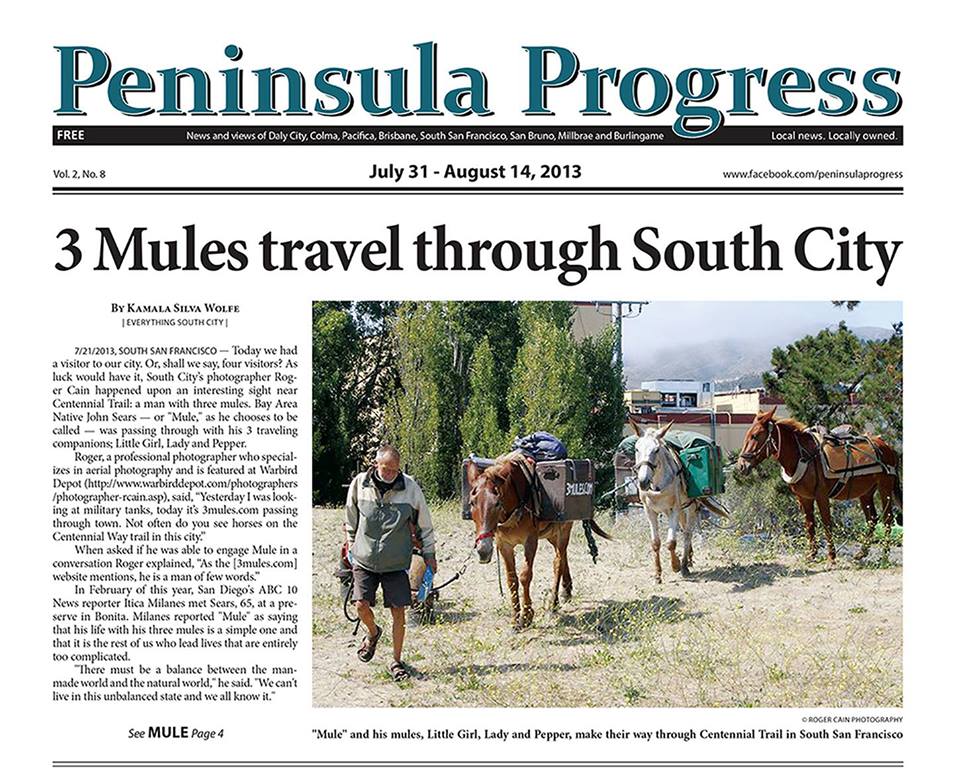