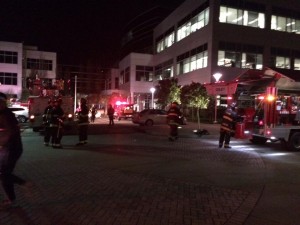 Hazmat clean up crews were still on hand at 8pm
Photo: Gary Cruz

Firefighters were called out to what was reported to be a structure fire today at 3:27pm at local biocompany AMGEN at 1120 Veterans in the East 101 area. Dispatch upped the response to a 2nd alarm according to Fire Dispatch.    Reports state an employee was mixing chemicals when an explosion occurred leaving the employee critically injured and a 2nd person with minor injuries. The critically injured patient was transported to St Francis Hospital. No other employees were injured and the explosion did blow out windows but did not cause a (edit: large structure) fire.

As of 8pm Hazmat crews were still providing clean up in the building as witnessed by South City resident Gary Cruz.  Cruz, who is an international photographer, runs out near Oyster Point when he saw the hazmat & news trucks. As he often does, Cruz snapped a few photos for our neighbors on Everything South City. 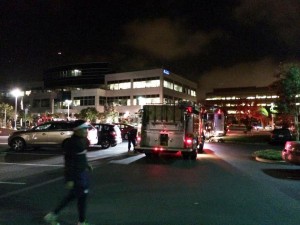 According to Luis Da Silva, our Fire Marshal, no chemicals became airborne. The area had been shut down which created some commuter adjustments. The 5:30 Ferry was canceled leaving 3 buses to accommodate those commuters to Oakland & Alameda. Shuttle pick up location was changed to Oyster Point/Eccles since the Britannia Oyster Point area was closed.
On a side note, the Ferry received additional funding from Water Emergency Transportation Authority to be used as an emergency escape route in case of emergency. Who else thought having this located at the end of a 2 lane landfill road was not the best planning? In time we will know if the Ferry Service will continue since it has not come close to meeting the numbers it needed to continue indefinitely. We hope it does succeed, there is way too much tax payer $$ down the drain if it doesn’t. Google recently announced they have chartered their own 149 seat Ferry to move their employees to and from work, which seems to be a good idea.

“MTC delivered $29 million in Regional Measure 2 bridge toll funds to finance WATER EMERGENCY TRANSIT AUTHORITY aka WETA’s purchase of new ferries. This includes $12 million to cover the lion’s share of the $17.8 million cost of two new vessels for the East Bay-South San Francisco ferry service plus $17 million for two other ferries that will provide spare vehicle capacity for various San Francisco Bay Ferry routes. WETA used another $7 million from Regional Measure 2 — which was approved by Bay Area voters in 2004 — to help pay for environmental studies, design work on the Oyster Point terminal, Clipper fare-payment equipment and berthing facilities at Pier 9 in San Francisco. MTC also is using RM 2 toll funds to provide most of the operations subsidy for the East Bay-South San Francisco ferry service” more on this marketing link HERE 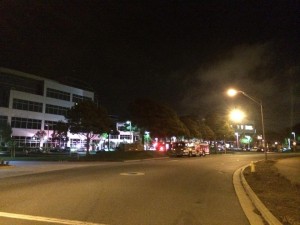