The fact that Halloween fell on the same day we all were celebrating the SF Giants World Series Win at the Parade in San Francisco made many wonder how the evening would go for Trick or Treaters.  Throw in some rain and some concerns over the new street lighting with tired parents on a Friday night and what would we get.

Time has shown over and over again those neighborhoods that have worked hard through the years to maintain a tight knit community will experience the greatest return. And once again we have to look at  Winston Manor as a shining example of neighbors who work together creating the type of neighborhood in which they want to live.

As with most organizations there are the those few who keep things going week after week, month after month, year after year, and sometimes going it alone. But they keep it going. They hold annual events through out the year that the majority of neighbors enjoy and look forward to participation and Halloween is another big one.  This neighborhood shows what can be accomplished when neighbors come together and work to the betterment of all. The Winston Manor Community Association works because it is driven from within the community by ‘everyday neighbors’  it is not controlled by outside interests or government.

While our focus now is on the Halloween wrap up we wanted to acknowledge the good work done by our neighbors in the Winston Manor area since they continue to be successful with their events and provide a good example for us all.  And they were not the only neighborhood to have a great turn out, only one of the most consistent with all their events. And from the comments below we can see how successful their Halloween turn out was once again. 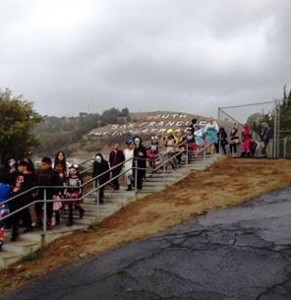 We had over 100 neighbors LIKE this post on our FB page on Halloween night when this was posted:

Belinda My Winston Manor neighbors were great! My kids’ love every minute of it. There was just one incident though that an adult was trick or treating. A lady, no costume, asked for treats from us twice. She says it was for 4 kids then she crossed the street to our neighbor’s house, asked for Candies & I heard her ask my neighbor if she could use their bathroom.

Erica It was DEAD in Mayfair Village!! I don’t think we gave out half our candy. Very weird – not like it was raining anywhere near trick-or-treat time.

Maria West Winston Manor was crazy! I went through 500 pieces of candy!!!

Maria responds: LOL, all of it. I had to ask my kids for some of their candy so I could keep my doors open until almost 9! Was worried I would have left overs not knowing if it would rain, but that did not stop any of these kids from coming out last night!!! And I’m keeping my fingers crossed that we won our pumpkin carving contest!!!

Moserod had quite a few kids.. WWM .. We had company at the time and they could not get over how polite most of the children were.

Mick We had only 1 or 2 on Avalon Drive and this was the quietest year ever.

Marcie We had 50 people – counting families, too!

Laura Buri Buri was dead this year. Hope it is better next year.

Fabian Around Beech Ave and Spruce we had like 4kids come by, left the lights on till 9pm. A lot of the neighborhoods didn’t not have the lights on for the goblins!!

Lynn It definitely was a quiet night. Lights were on until after 9 and still only had about 30 or 40 kids…. Miss the old days when it was non stop kids and families

Davida In the 18 years I have lived on Third lane, we have had 1 trick or treater. The only kids we get on our block are teenager mischief makers. I noticed a lot of parents on Grand Ave drive their kids to other places. Wish we could find a way to make our streets more kid friendly

Pat I left at 730 to go trick or treating with my niece and nephew but at that point, we’d only had 10-15 kids. I thought it was because of the rain and that the new lights have left our block sooo dark!

Hugh-John I am glad I grew up when I did and was allowed to have fun. Kids today are bobble heads in bubble wrap.

Olga Sunshine Gardens was slow as well I always go through 2 bags of Costco candy this year only half booooo booooo where did the babies go? I guess since it was Friday parents wanted to go out and party lol

Debi Winston Manor busy! Went thru 3 bags of Costco Candy!!!! So many kids! And teenagers….. Was good to see them having fun again. It is usually so dead around here. I think a lot of kids come from SF and DC.

Renee I live close to the main library on Orange Ave and it used to be so busy that I would almost run out of candy . This year was so slow I could not believe it

So we ask – how was Halloween in YOUR neighborhood?