As one of the country’s most popular holidays, St. Patrick’s Day   has long celebrated the roots of 34.2 million Americans with Irish ancestry, and many more who just want to partake in the festivities. This year, if you’ll be drinking alcohol, remember: Buzzed Driving is Drunk Driving.

Tragically, March 17 has become one of the nation’s deadliest holidays. In fact, from 2010 to 2014, almost three-fourths of the drunk-driving fatalities during this holiday period involved drivers who had BACs well above the .08 limit, with 266 drunk-driving fatalities total nationwide, according to the National Highway Traffic Safety Administration.

To help lower deaths and injuries, the South San Francisco Police Department will be deploying extra officers on St. Patrick’s Day targeting problem areas with high numbers of DUI collisions and DUI arrests. These DUI patrols along with routine nightly patrols will be looking for the tell-tale signs of impaired driving to include weaving, crossing the center line, etc.

And keep an eye out for pedestrians who have had too much to drink: Walking while intoxicated can also be deadly, as lack of attention could put you at risk of getting hit by a vehicle. So whether you’ve indulged a little or a lot, law enforcements wants to remind everyone to drink and drive is a crime -you put yourself at risk, as well as others. The consequences are often fatal.  Let’s make 2016 safer.

Use this party-planning checklist to stay safe this St. Patrick’s Day. 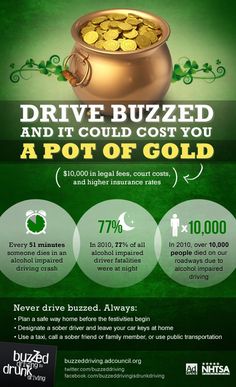 UPDATE: 107 CITATIONS WERE GIVEN TO SPEEDERS IN SSF. MORE INFO CAN BE FOUND HERE