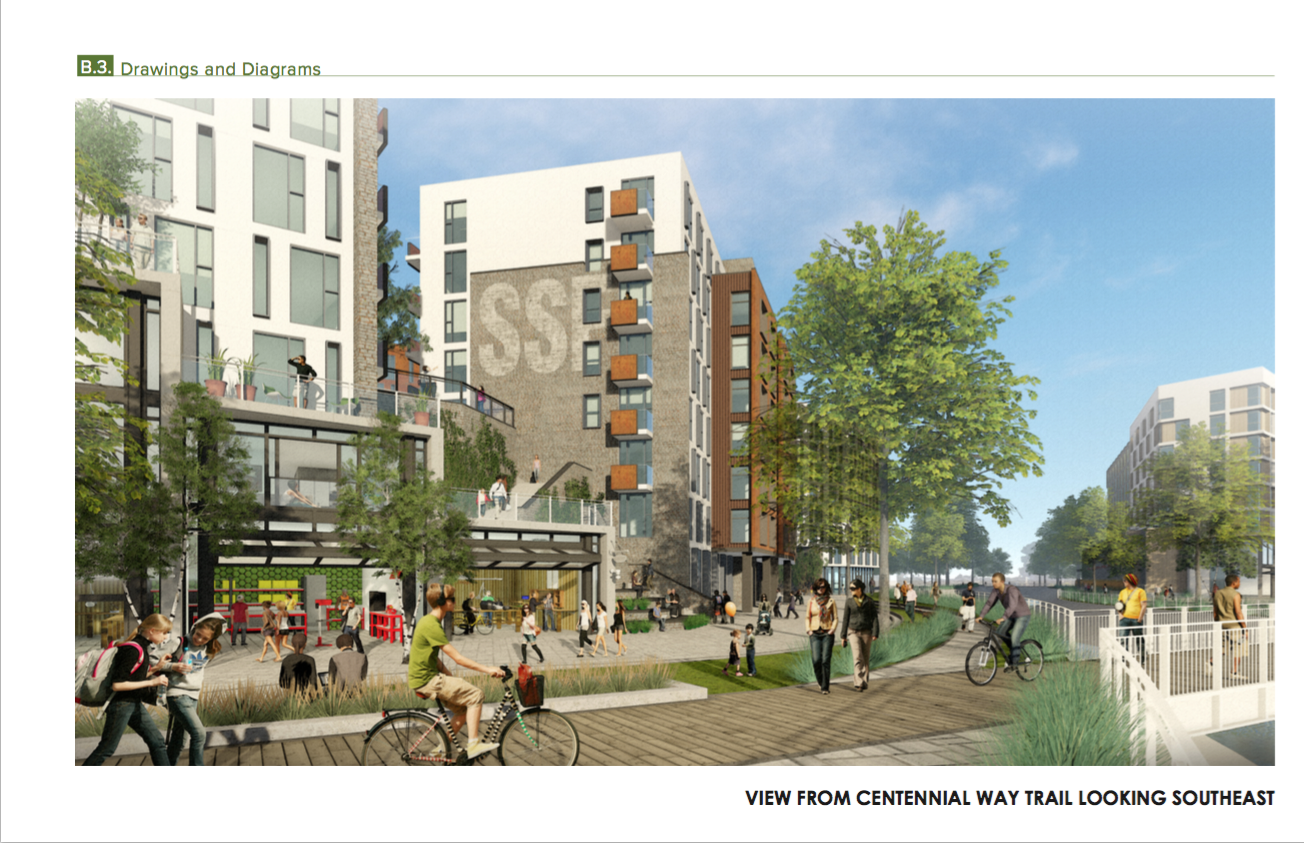 AGI/KASA renderings of what the ‘PUC’ development might look like in Sunshine Gardens. Eric Tao said they would be able to work with reducing the height as the Council agree to no high rises.

Residents were awoken to news the City of South San Francisco was aimed to pick a developer for the former 6 acre PUC site located in Sunshine Gardens and they came out in force to the March 28th Joint Council-Successor Agency meeting to protest the 8-15 story proposed development. Neighbors in the area continue expressing their neighborhood, zoned for single family homes, has become over built yet lack basic amenities such as a park for their kids. Still reeling from the impact of BART and commuters taking over neighborhood parking and whizzing through their side streets using apps like Waze to hurry them through, they stood up and said enough is enough.

The sale of the Cuneo property on Mission Road was private and resulted in City Ventures building 35 units in what was once a farming field. South City Car Wash is another private sale and will be demolished to bring in a 6 story 174 unit development which further impacts the area. And the City’s Civic Center is estimated to bring in another 1000 cars a day to Chestnut Avenue and Mission Road.

What was unique about this property is the fact the City bought this, along with other connecting parcels through the Redevelopment Agency, and still had control over what would be built prior to selecting a developer and selling the land. While government agencies changed hands from the Redevelopment Agency to the Successor Agency, the fact that the council would be the lead negotiator wasn’t lost on the public. The sale of this property will be split between the School District (43.91%), County of SM (25.77%), City of SSF (16.73%), SMC Community College District (7.38%), SMC Flood District (1.64%), Willow Gardens Maintenance (.12%), Bay Area Air Quality Management District (.38%), and the SMC Education Tax (3.84%) per the City’s breakdown.

At the conclusion of the March 28th Joint Session Mayor Liza Normandy expressed some concerns on the project and concluded more community input was needed before choosing a developer.

“We knew if we were to wait until a developer purchased this property with the intent on such a massive project, they would be forced to push ahead against neighbors concerns because they would need to not only break even, but make a nice profit.” Mike Smith said. “The company that would end up owning this needed to know the residents would not tolerate anything above three stories.” 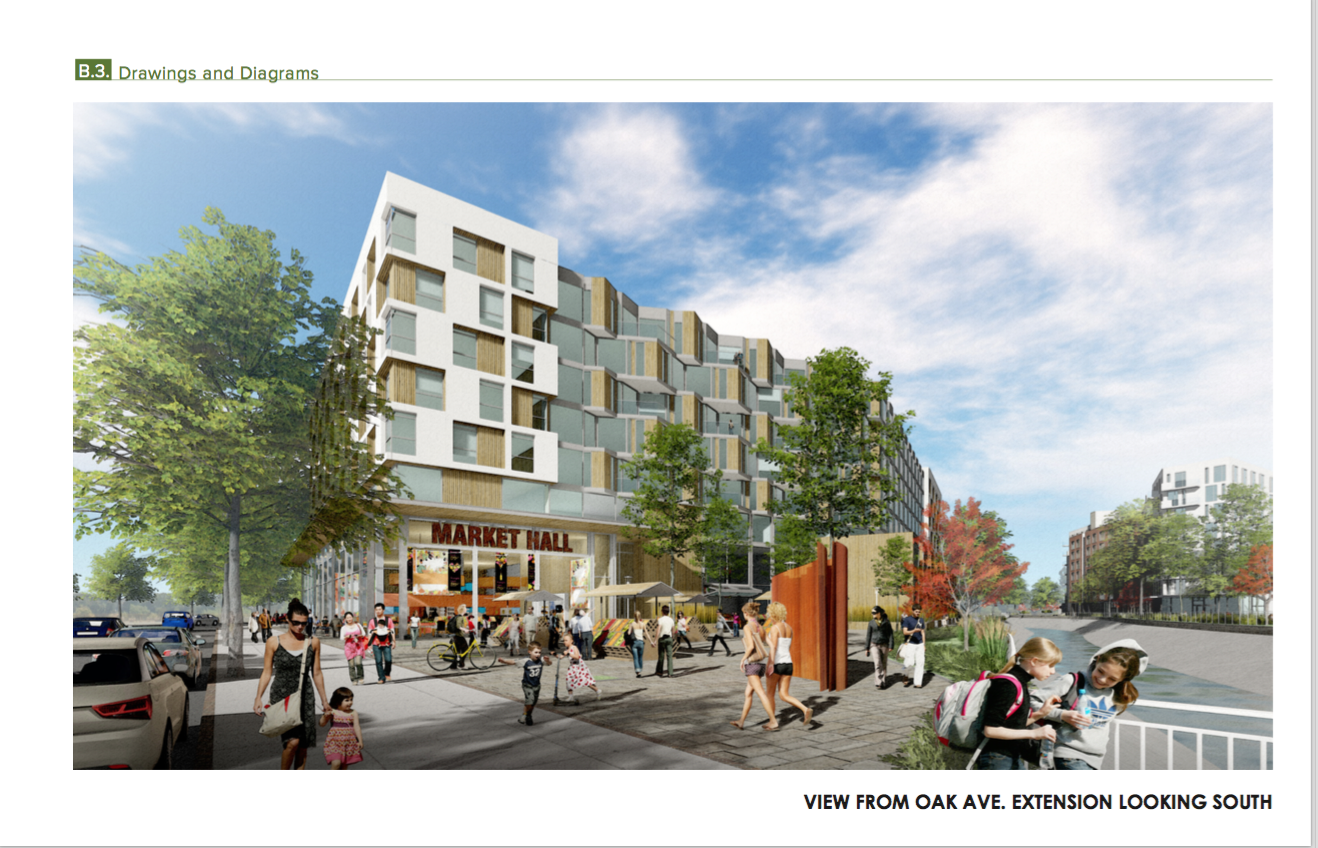 Part of the development requires Oak Avenue to open to El Camino Real at Arroyo Drive. 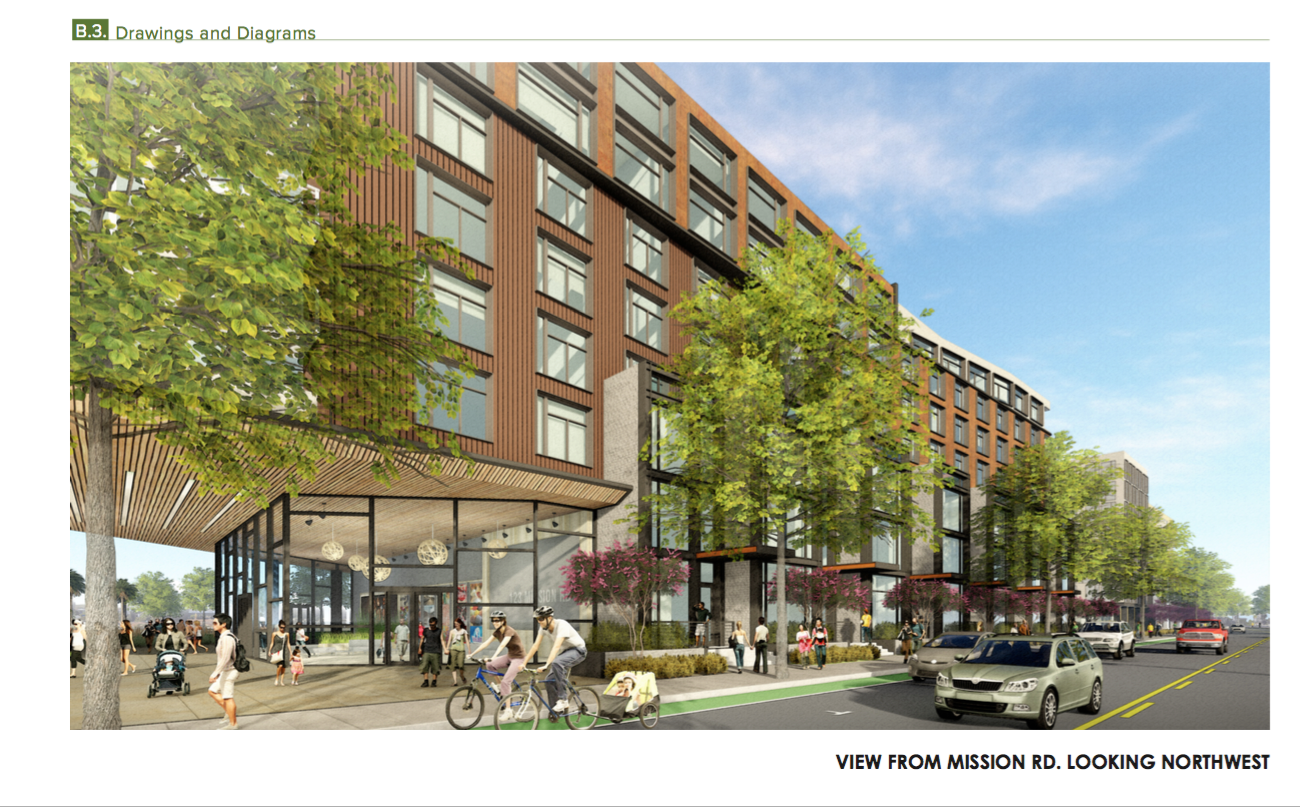 ‘NO MORE THAN 3 STORIES’ came the rallying cry from residents across the City coming together to organize a group SSF Residents 4 Smart Growth in response to what many see as too much building too fast. “Stop these mass developments in our City, you are destroying what is left of our bedroom community. We vote and remember what our elected officials are approving and a rebellion will begin if this persists” Anthony D Lazalde wrote echoing what many are saying.  “Our town is being destroyed.” wrote long time City leader Roy Bava. His sentiments were shared by another long time resident Barbara Rubino “Please consider what can’t be changed later. Too much traffic in the area already.”

“Not in our neighborhood! Traffic is already causing congestion at this site, adding this development will be chaotic” Aurora Pangilinan wrote when signing an online petition aimed to ‘Slow the Roll, Pause the Powers’ as the theme for the opposition. “Responsible development that considers the impact on the community” is what Etta Breaux wanted to convey as many recall this area at El Camino Real and Chestnut was recently a ‘red light camera’ intersection.

Realizing the much needed housing is a symptom of local employment booms, residents are tired of being displaced by new comers when our  infrastructure cannot do what is needed even for those now living here.

“I have been a resident of SSF for 52 years. I grew up in Sunshine Gardens and when my husband and I got married we purchased the home we currently live in also in Sunshine Gardens. We raised our children in this house. Through the years I have seen SSF go through many changes and growth. Some for the better and some not.
The traffic just getting from one side to the other takes much longer than it did years ago. It’s frustrating when you’re going to an appointment. With the planned utilizing on Old Mission Road it will certainly adversely impact the traffic situation to an unbearable level. I was recent talking to a city employee about the city’s infrastructure and was told that our current sewer system is over 100 years old and all this new building, including all the office buildings in the East Grand area, tap into our current sewer system.
Shouldn’t money be spent on upgrading our antique sewer system before we overload it. It just doesn’t make sense to me. I just hope our city takes the residents feelings to heart before agreeing to high rise proposals.” – Winnifred Girad

To gain more input per Council’s agreement, the City held two workshops on April 28th in the Atrium of the MSB, inviting four of the developers to showcase their ideas and renderings, at 10am and again at 6pm allowing residents opportunities to attend one or the other. The City speculated there were over 250 attending the workshops as they also garnered attention by those residents who were visiting the MSB for classes or other purposes.

“It was a good opportunity for us to see what direction the City was looking to go, I’m glad I attended.” Megan F said. “I don’t agree with the heights at all, too much for that area.”

The City had requested developers take advantage of the extended heights to maximize housing which brought in proposals up to 15 stories.  “And then the public told us what they thought of 12 and I suspect that 12 is off the table,” Councilman Mark Addiego was quoted by KGO during an interview during the morning workshop. “I’ve lived in south city for 38 years and I’m not happy with any of this,” Angelique Presidente said during the say interview, “If the residents in South San Francisco wanted to live in San Francisco we would have. We chose South San Francisco because it’s a small local community where everyone knows their neighbor that’s what we want to keep.”

Last evening the City held a Special Meeting to allow the four developers to once again show their vision and for the public to speak about what was important to them. Over a thousand signatures and comments were delivered to the City Clerk earlier that day, acquired by the outreach done by the SSF Residents 4 Smart Growth group.

Impassioned residents talked about the traffic congestion, lack of amenities, parking, general overcrowding, feelings of being squeezed out, the desire to keep the small town feeling which brought so many to South City to begin with were tempered with a few calling for more building and to build bigger. “My partner and I rent in Sunshine Gardens and we’d like to buy but we can’t. We need to build more and I encourage the highest density possible” one neighbor said. Another speaker, Milo Trauss from Oakland, and founder of YIMBY, also encouraged more density. “Housing is a regional issue and not a matter for South San Francisco residents alone.”  “The City gets an A in bringing in jobs” one commentator said last evening “And they get a C- in keeping up with housing.” To which another attendee agreed. “That is why we must put a moratorium on jobs coming into our City. This is not sustainable and is unfair to both workers expecting to move here, and those that already make South City their home.”

Council members excused themselves to engage in the closed-door session to review finance information prior to making a decision by votes when they returned to the dais. Councilmember Garbarino said he appreciated the community coming out to speak up and that he did in deed hear them. “I hear no high rises, I get it.” Mayor Normandy agreed, “No high rises and we must have prevailing wages.”

AGI/KASA was chosen by the Council with Blake Griggs Properties coming in second. SummerHill Homes and Republic Metropolitan also  shared the honor of being one of the four finalist.

BizJournals highlights what AGI/KASA brings to the community listed below.:

Eric Tao spoke passionately at the meeting, stating his company AGI/KASA had exactly what was needed, the 3 C’s: capital to build it, city participation and approval, and community engagement stating a project in the Dogpatch neighborhood of San Francisco had been strongly opposed, even by Hell’s Angels. Through AGI/KASA outreach the end project was appreciated even by those who had opposed it, Tao said.He also acknowledged it would not be difficult to bring the buildings down in height, they had flexibility which would work for the site and with the neighbors.

It is noteworthy that AGI/KASA also developed the ‘Grand Oak Apartments’ in the Sunshine Gardens neighborhood and ‘Peninsula Mandalay’ the tower on San Bruno Mountain overlooking San Francisco Bay and beyond.

While this sounds encouraging to many, others still have their doubts. “This may seem a victory in someways” a South City resident said “We still need a larger community group watching this as it unfolds. Mayor Normandy may have said no high rises and yes to prevailing wages, but we must keep our officials feet to the fire to be sure current South San Francisco residents have priority for the residential portion of this development.”

It will take a few weeks for details to be negotiated and we will make every effort to update this as we can. Please do continue to send us tips at news@EverythingSouthCity.com

To read more about this ‘PUC’ project  CLICK HERE 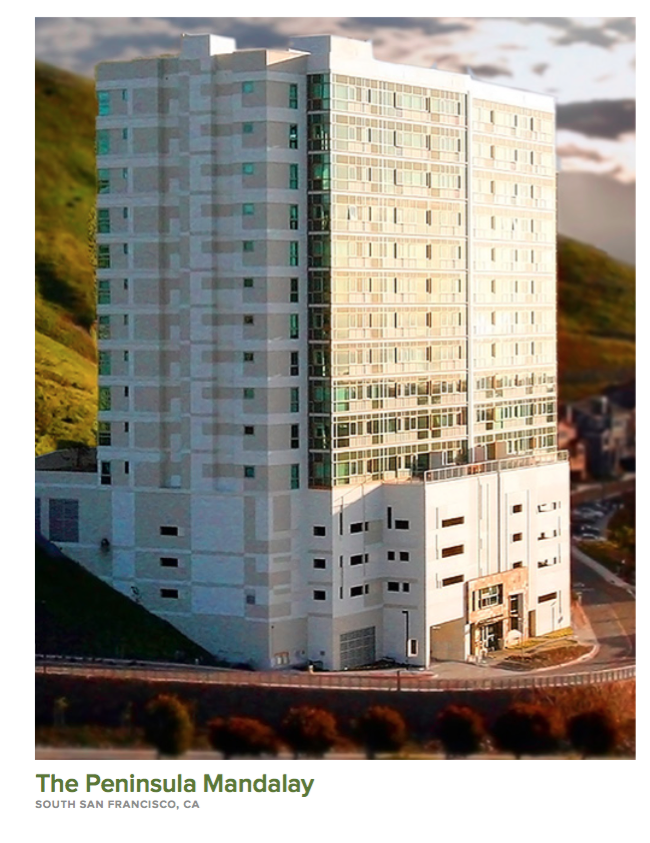 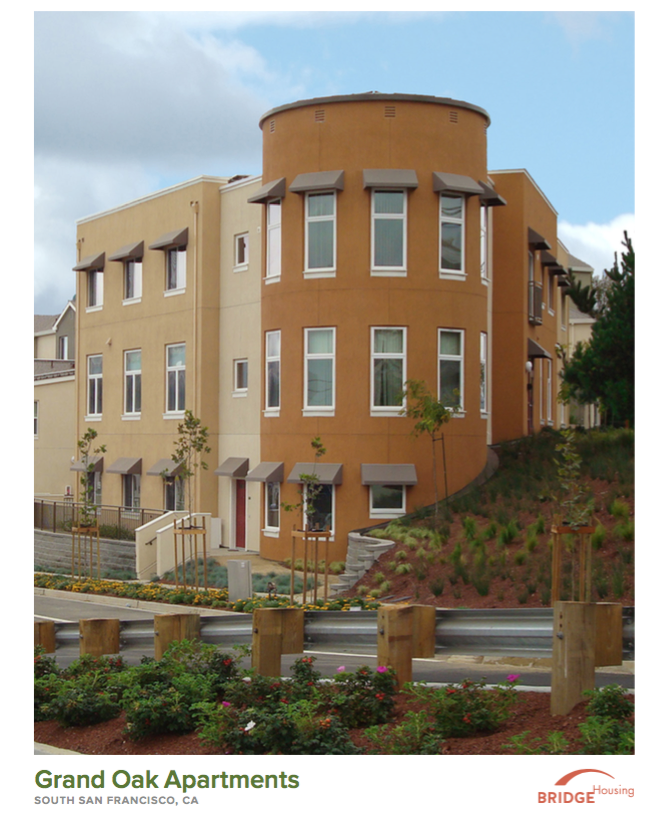 The Grand Oak Apartments were developed by AGI/KASA