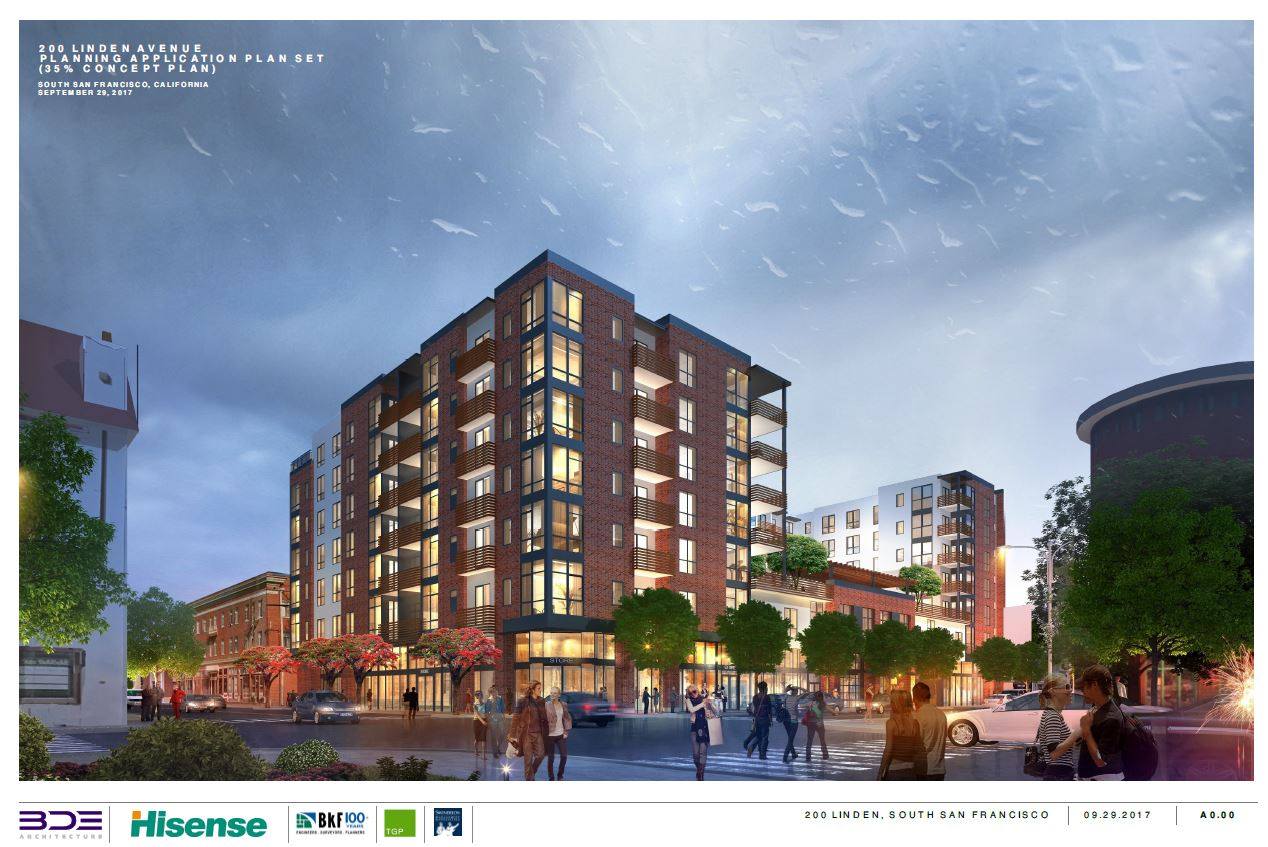 Groundbreaking Ceremony for the Hisense Project located at 200 Linden Avenue, South San Francisco is scheduled for Thursday, November 15 at 10:00 a.m. at the project site.

The community is invited to learn more about the project as the contractor prepares for the start of construction.

Hisense will develop a seven-story, 97-unit condo project with 6K SF of ground-floor retail. The project, which would be the first U.S. development for the Chinese developer, also will include 19 affordable housing units.

Current view at an angle of 200 Linden at Baden Ave

South San Francisco has approved the sale of three city-owned sites downtown for the development of more than 180 homes under its plan to revitalize the city’s transit-rich commercial core.

In what would be their first project in the United States, the developer plans to build an eight-story 97-unit condo project at the site with around 6,200 square feet of ground-floor retail space.

Under the city’s inclusionary housing program, the project will include 19 on-site affordable units. Hisense’s proposal beat out other plans for the site including plans for apartments and a hotel.

“The council was particularly interested in for-sale housing and the possibility of bringing more homeowners downtown,” said Alex Greenwood, the city’s director of economic and community development. “They were also excited about the possibility of street-level retail. High-quality design and strong financing were also selling points.”

The project is set to start demolition of the existing buildings in December and start ground-up construction next spring.

South San Francisco has also approved the sale of the sites at 201-219 Grand Ave. and 418 Linden Ave. to Roem Development for a total of $1.7 million

The Santa Clara-based developer plans to build 46 apartments at the Grand site, nine of which will be below-market-rate. The project will also have approximately 6,000 square feet of ground floor commercial space.

The 418 Linden project is entitled for 38 apartment units, and was initially approved in 2015. Roem took over the development when Brookfield Equities dropped out of the project after issues with financing the project.

“The $3.5 million was offered to ensure the financial feasibility of having 20 percent affordable units at the projects,” Greenwood said.

The projects are entitled. The Roem Development buildings are scheduled to break ground in April or May of next year.

The next city-owned site downtown ripe for development is the retired historic firehouse at 201 Baden, which was recently opened up for a request for qualifications. The 22,500-square-foot site is currently zoned for up to 62 units.

Developers have been scrambling to meet the housing needs of the city’s growing biotech workforce. Chinese developer Greenland USA started to explore adding housing to its massive waterfront biotech development, the Landing at Oyster Point. A possible sale to Kilroy Realty has called those plans into question.

Earlier this year, a six-acre development site on Mission Road zoned for up to 1,000 units for housing was opened up for a request for qualifications. The city expects to narrow down the list of possible developers for that site in the coming months.

In 2015, the South San Francisco approved a new downtown plan that allowed for denser housing and encouraged more public open space and the addition of bike lanes. Another improvement will be the relocation of the Caltrain station closer to downtown by 2019.

A number of projects have been approved in the city’s downtown since the adoption of the plan two years ago. A 260-unit development by Sares Regis at the corner of Airport Boulevard and Miller Avenue is in the works and an 81-unit affordable senior housing project at 300 Miller Ave. recently broke ground.

“Downtown is alive with urban high-quality housing,” Greenwood said. “We’ve seen a strong renaissance in our downtown in the past three years.”

I’m a single mother with 2 teenagers, I’m pregnant with twins and I’m in a need of finding a place to live. Apartment with 4 rooms. I’m limited in my income I make 65k per year.
I currently rent a room here at SSF with relatives but I can’t stay with 2 more kids.
Please support us letting us live in one of the low in income / affordable apartments. Please let me know how to apply please email me.

I’m a resident of South San Francisco since 25 years ago. I’m a single mother pregnant with twins, I also have 2 teenagers one is 18 and 15th. We are looking for an affordable apartment. We rent a room here at SSf. I won’t be able to stay there we need a bigger place, my children take online classes and I will have 2 babies I’m really in a need to get an apartment. I work and earn about 62k per year but I can’t afford a normal rent.
We live here my kids go to local schools and I have my job at San Mateo and we have family near by. Please help us give us the opportunity to get an apartment with you we need your help! We are decent people, good record, excellent credit but I’m limited in my income.

Hi, I like to see if you still have affordable housing unit in your apartment. Please advise me by email if there are any

Hi, I like to know more about your affordable housing program in South San Francisco.
Thanjs,

IS THERE GOING TO BE PARKING AVAILABLE FOR 200 LINDEN AVE, SSF ?

My son is interested in having information about your units at 200 linden ave South San Francisco CA and also wanted to know what are the requirements in order to qualify. Please provide me with an address to apply either in person or online. Thank you very much for your prompt attention to this matter.
maggiezevallos@gmail.com and
Lizatu86@gmail.com
hsalgado@smcacre.org
Thank again

Hello,
I’m interested in getting a unit.
Can you please give me details and where and how to apply?