UPDATE 3.20.19 9:30am: SSFPD have issues a press release on this accident which can be found CLICK HERE, source was DUI driver who was also arrested for Child Endangerment.

PREFACE: Coming across this accident and the ensuing traffic congestion, Everything South City’s Roger Cain snapped a few photos and shared on our social media.

Lanes westbound are closed, consider an alternate route to avoid the traffic backup at Huntington. 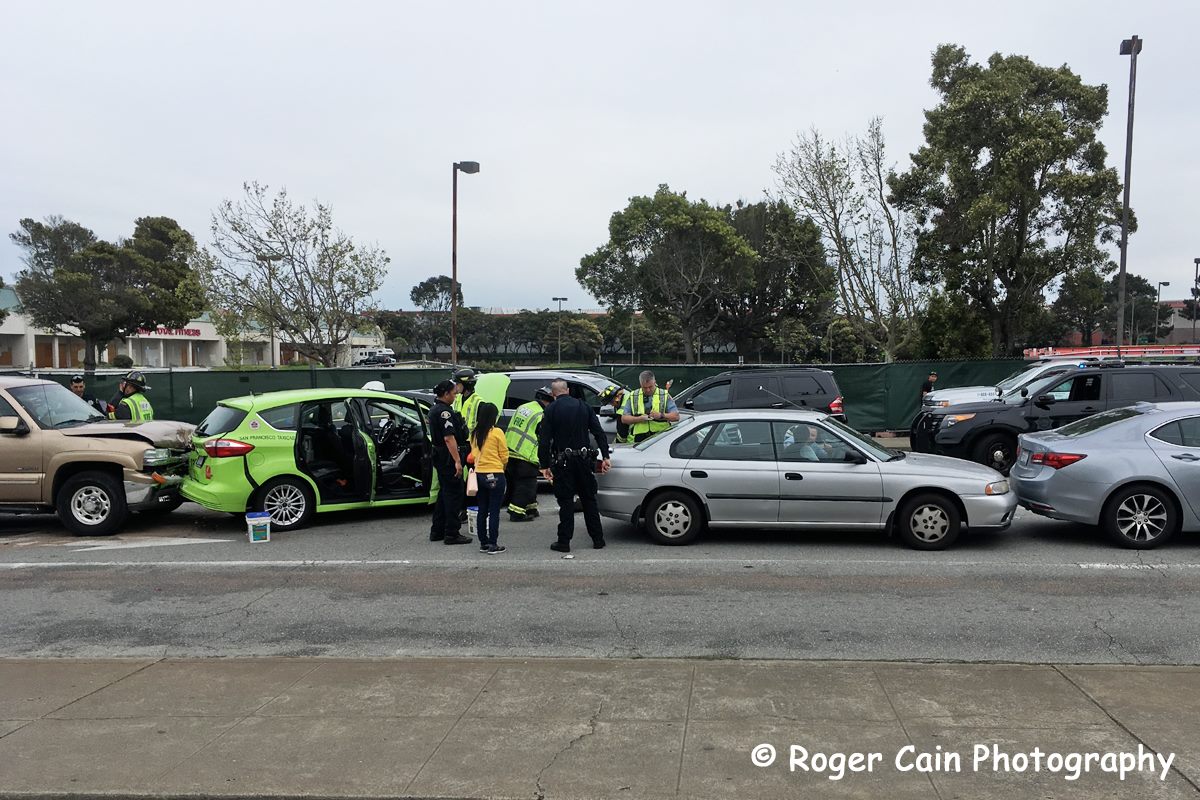 Monique: 1st…..I hope everyone is ok??2nd….. Traffic is crazy in our city and it’s only going to get worse as they continue to build on every corner…..

Amanda : I am *still* waiting to hear if additional traffic mitigation measures will be taken on spruce. it is going to be INSANE on this stretch if the developer ever builds anything on this eyesore. South San Francisco Economic and Community Development Department

Hikey; Too many people living in south city. The city needs to make more roads then housing!

Angelina; no they need to stay off the phone and pay attention to the roads

Amanda to Rey; like all of the other people who are like “i don’t care if the speed limit is 30 on this street. rules don’t apply to meeee!!” ???

Bianca; Hope everyone is okay. I definitely don’t want to judge, but it seems like a hard spot to have such a big accident unless someone wasn’t paying attention.

Melissa to Bianca; it seems like a few drivers weren’t paying attention not just one

Rosanne; It only takes one person not paying attention to cause something like that, unfortunately. Hope everyone is ok too.

Wendy ; Fix the lanes at that spot. To much crunching of the turning onto El Camino going south and trying to go straight across. Make right turn lane both turn and straight. Then ADD a LEFT TURN GREEN ARROW. This is such an old problem. Shame on you City of SSF

Amanda to Wendy; and make it a no right on red!

Marco; Keep on building ….we haven’t seen anything yet….

Vinish; I live on commercial n magnolia 8 out of 10 vehicles don’t do a California stop just keep driving scary

Theresa; I wonder how many of the drivers were busy doing other things in addition to operating their cars.

Patricia; How does this even happen? A multi lane road that is fairly straight.
Too much traffic in South City now, I guess.

Bernadette; It’s getting so bad… because it’s way overcrowded now. Way to many people!

Phil ;. Look at the beautiful scenery in the background. What a dump we live in.

Patrick; I bet the person who caused it was on their phone….

Irene; I saw it today and there was the accident when I driving to the right side to left side ahead to going to work today.

Randy; Let me guess, they were using their phones.

Helen; Holy cows, his did that happen? Five cars?

Jhenrick; Rain is not even here yet…

Vanessa; Oh I didn’t see that one lol

Camila to  Vanessa; I had to take the back road to get home from bayshore in Burlingame was backed up all the there….?

Mary; Really hope everyone is ok!!!

Karen; Some guy in a red toyota totally blew through the stop sign at Linden and Victory tonight. Good thing nobody was turning, or there would have been a serious wreck. 🙁

Norah; Slow down everyone

Dayn; Hope all is Ok

Skip ; People just don’t know how to drive. It’s a shame to have to share the roads with a bunch of crappy drivers

Mark to Skip;  very true, Bay Area has the worst drivers I’ve ever seen, leave a little early instead rushing and tailgating. Litterbugs too.

Angela; It’s from all of the traffic and building that is going on in the city. Unless this issue is addressed by the city Council the issue is just going to get worse.

Phil; oh try NYC thats crazy, BUT, it’s pretty clear SSF will wind up just like NYC after they finish all the building. I wish I didn’t have ties to SSF I would be out of this place

Well, I live off Mayfair and for the past few days I have noticed NO FLAGMAN even though they have closed one of the two lanes on Spruce and are redirecting traffic. I see how this might have happened!

Everyone complains but when there are meetings about the ridiculous growth they want to do in our city, no one goes to the meetings to vote these ppl down! I’ve been and never not enough to make a difference. It probably was from all these ppl on their phones,(the accident) not paying attention, too many ppl in SSF, we don’t need/want any more housing, stop building in what was once a great place to live. Then you have 4-5 families living in one house! They get ppl from out of state, don’t even live here making changes to our community. Have been here since the 50’s and its just too congested now with ppl who don’t care about our once great city. Tearing all our memorable businesses down ….. JNR!!

the city is broke, they need all the revenue
they can get, high price salaries, and all
that, noticed any traffic improvements?
buy a horse