Today the City of South San Francisco recognized September as Suicide Prevention Month with the installation of the yellow bench on Linen Avenue which was unveiled to show the crisis phone number, 988. September 10th is International Suicide Prevention Day, the date was first established in 1960 in Vienna, and today the W.H.O states there are approximately 700,000 suicides worldwide each year. As of July 2022 the 988 crisis number is live nationally.

Our own City has sadly reported three homicide suicides since 2019, and while we do not know how many individual deaths were self-inflicted, we do know depression is real and needs to be openly talked about. The yellow benches offer a beacon of hope along with local resources.

The yellow benches are part of the outreach established by the parents of 21-year-old Josh Nadelbach who took his life in May 2018, after suffering from depression. Josh’s mother, Cindy Nadelbach, wanted a way to help spread awareness about mental health and the local services available to help the community. The yellow benches were born from her work and have been placed in many locations throughout the Country. Read Josh’s story HERE.

The color yellow is for hello.

The benches are built by Jeff Industries, which was also born out of the incredible sadness of parents losing their child to suicide. Their son Jeff, after being released from a State Mental Hospital, had no resources to help him transition to a life outside of the hospital. He ultimately took his own life. ‘In 1983 Jeff Industries was incorporated as a 501(c)(3) agency by his parents to fill a need for meaningful community-based programs that assisted mentally ill persons in the transition from hospital to the community. Adults with serious mental illnesses were given the opportunity to be productive and to increase self-esteem by building picnic tables and bike racks, etc.’ Read Jeff’s story HERE

Earlier this year the 988 emergency mental health crisis line was released to offer help to those needing resources in California, there has been some concern about continued funding and other logistics of this effort which is being worked through.  Additional local resources can be found at Star-Vista HERE, their hotline contacts at 650-579-0350, 800-273-8255, and the San Mateo County Crisis Organization HERE. 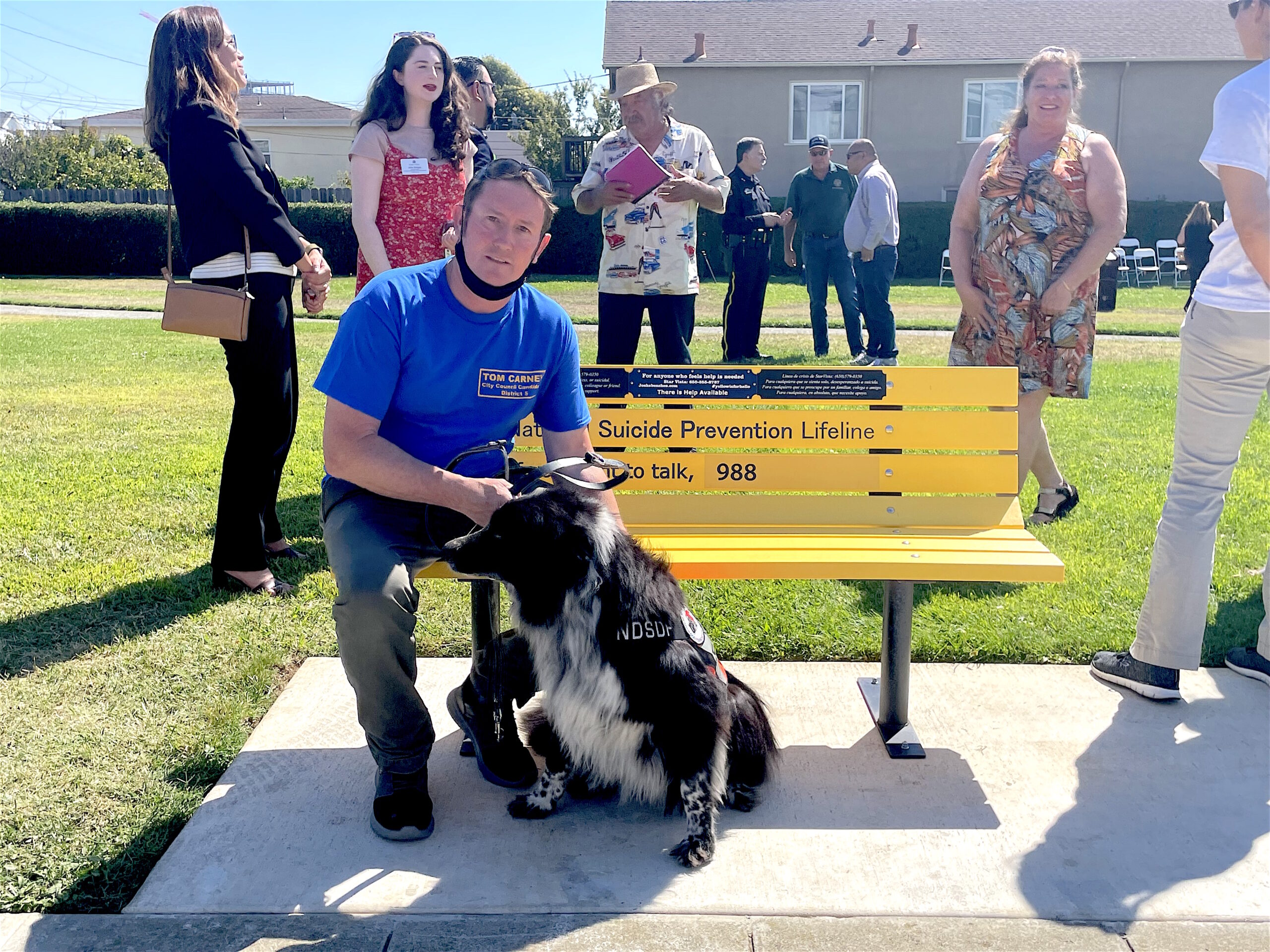 South City resident, Tom Carney, was one of the attendees at today’s ceremony. He knows firsthand the devasting impact the loss of life has upon families. Tom, as a member of the  California Task Force 3 (CA-TF3), has responded to 10 search and rescue missions with his certified trained search dogs, Gypsy and Allie. Attending today’s ceremony Tom said, “ It’s important for the City to highlight suicide awareness initiatives. This yellow bench serves our community to remember that they are not alone, help is a 988 call away.” In 2009, Tom and his search dog Gypsy responded to a missing person search on San Bruno Mountain.

A person’s death by suicide has repercussions that reach beyond the family and close friends. From those who were acquaintances and wonder if they missed a clue to the first responders who are called after the fact and cannot erase the scene from their minds, the sense of helplessness reverberates. “Because this hurts a whole community it really is up to the community to ensure resources are available.” Carney expressed. “I hope this yellow bench will make a difference in lives that pass by – you are not alone.”

We never really understand another person’s pain yet far too many of us have lost a loved one to suicide. It is up to us to carry this message of hope, to help those in need connect with the resources available, which can be as simple as sharing the 988 number. We hope that the world’s loss of Jacob and Josh and the legacies that have been created by their families can help.

If you would like to share your story with us, about mental health issues or suicide, please feel free to share. Together we can remove the stigma that has been unfairly placed upon our most vulnerable.

Tom’s the man! No other person I know has worked tirelessly to aid the homeless,the disenfranchised,and answer calls in the SSF community as a first responder than Tom. His contribution to District 5 is known to those who probably called 911 or for code enforcement.Those who haven’t lived in SSF working in the community for decades wouldn’t understand his value to Old Town.